Worlds Most Bearish Hedge Fund Shuts Down: Here Is The Farewell Letter

It was about four or five years ago that we dubbed Russell Clark (formerly of Horseman Global and more recently of Russell Clark Investment Management) the world’s most bearish hedge fund, and for a good reason: roughly a decade ago, Clark decided to take his fund net short – an unheard of event in an industry where despite the name, the average net exposure is well north of 100% – and while his market bias ebbed and flowed, it remained short for much of the past ten years.

What is more remarkable is that despite his extremely bearish positioning, manifesting itself largely in the form of bond longs, Clark managed to eek out consistent monthly gains and with the exception of 2016, he was profitable virtually every year in the past decade… and then 2019 happened and things started falling apart when the hedge funds lost a staggering 35%. 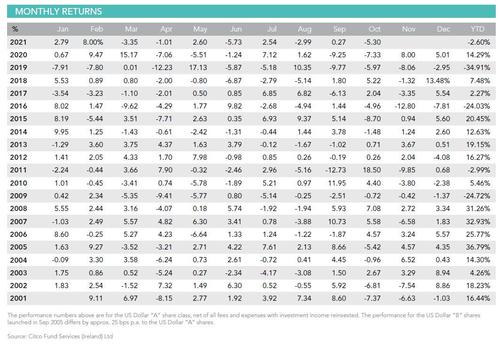 In many ways this was the beginning of the end for Clark – sensing what was coming, two years ago we wrote that the “World’s Most Bearish Hedge Fund” Loses 75% Of Its Assets After Worst Year On Record.” In that post we wrote the following:

Every trader has heard the age-old saying “don’t fight the Fed”. Everyone, perhaps with one exception: Horseman Global’s CIO, and recently owner, Russell Clark, who has been upping his bearish bets in the face of a relentless liquidity onslaught by the Fed, ECB and PBOC, which now also includes the Fed’s “NOT QE.” In fact, in his ambition to on up the central banks, Clark may have overdone it, because according to his latest investor letter, the fund’s equity net short position is now the highest it has been in history, at a whopping -110.87%, offset by a 60.59% net long in bonds.

Alas, while we admire Clark’s courage, we have less empathy for the fund’s performance, which has seen better days, and after slumping 6% in October, and losing money on 4 of the past 5 months, is now on pace for its worst year on record, down 27.05% YTD, surpassing the -24.72% return posted in 2009, and reversing all the goodwill the fund created with its 7.5% return last year when most of its peers lost money alongside the S&P500.

In light of the above, we have been fascinated how long Horseman can remain solvent as the Fed remains irrationally bullish and liquid, and unfortunately for Clark – who recently put his personal money where his mouth is and bought a controlling interest in Horseman where he was the main portfolio manager for years – the answer appears to be “not much longer” – as the fund reports, as of October 31, the AUM for the Horseman Global Fund was down to just $150 million…

Two years later, despite the crash in early 2020 which helped boost the fund’s fortune, the slow and steady death by a thousand redemption letters continued and this morning, our prediction has finally come true and the man who for the past decade valiantly fought the Fed, and all other central banks, has finally thrown in the towel and with capital in his core RCIM Global Fund dropping to just $119 million from as much as $1.7 billion in 2015, Clark writes in what is his last letter to investors that “after a couple of years of turbulent markets and the increasing influence of politics rather than economics on the markets, I have come to the decision that the best way forward is for the Fund Directors to wind up the fund and return capital.” 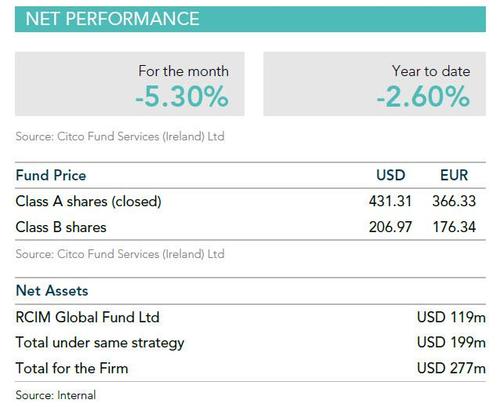 While Clark touches on many things in his last letter, what is most notable is the justification for his shutdown. To regular readers of Zero Hedge, nothing that he says will be surprising: the Fed has taken over the “market” which has now become a political “tool” to shape and mold public opinion, while the core nature of markets – price discovery – no longer exists, to wit:

Give me an economic problem, then I can properly gauge risk. Give me a Chinese political problem – I am taking a guess as much as the next person. Did I think Alibaba was going to fall 50% this year? No, not until the Chinese government told me to think that way. Is Alibaba a good short now? I have no idea, and like everyone else will have to wait to see what the Chinese government says.

So, I think it time to step back, have a think about where we are going, and then come back when I can see an opportunity for my skill set. Perhaps that’s never, but I doubt it. The only constant in life is change.

As always, we admire Clark’s honesty and courage to say it how it is, even if it means we may not hear from him ever again.

Meanwhile, in a fitting epitaph for his fund, Bloomberg writes that “the closure marks an end to yet another bearish hedge fund manager’s fund as stocks continue to march ahead. Clark, who uses macro economic analysis to bet on stocks, is among a series of long-short equity hedge fund managers who have fallen way behind surging markets and have suffered investors exodus.”

The end of Clark’s fund is a contrasting echo to how his investing career began more than two decades ago. As a graduate trainee at UBS Group AG in Sydney, he followed friends getting rich by day-trading tech stocks in 2000 and spent his first few paychecks on five dot-com shares. Four crashed to zero, and the fifth lost half its value as the tech bubble burst.

This time, a short wager on tech stocks was his latest contrarian bet. Clark told clients earlier this year that he was betting against technology shares as regulators from the U.S. to China crack down on the industry. Tech stocks as measured by NASDAQ Composite Index have been on a tear ever since.

Clark had been net short equities for the vast majority of the last nine years. He has faced a difficult period of performance and capital raising, and his firm — previously named Horseman Capital Management — shuttered two funds.

Born and raised in Canberra, Australia, Clark bought the controlling interest in Horseman in 2019. He had joined Horseman in 2006 and started running the firm’s flagship fund in 2010 when John Horseman, a highly successful global stock fund manager in the 1990s, retired.

Clark, who runs his investment firm from his office inside a small house in a quiet mews near Buckingham Palace Gardens in London, had said in 2019 that he was convinced that a stock market crash was near. Or, he told Bloomberg in rare public remarks, “this could be my farewell interview.”

He was right: the March 2020 crash indeed happened just a few months later, but in turn it produced the biggest and most coordinated market bailout by central banks and helicopter money in history. And that was the final straw.

Clark’s full final letter is below

The fund lost 5.30% this month, mainly from the short book.

After a couple of years of turbulent markets and the increasing influence of politics rather than economics on the markets, I have come to the decision that the best way forward is for the Fund Directors to wind up the fund and return capital.

The success I enjoyed from 2011 through to beginning of 2016 largely stemmed from asking the question that no one seemed to ask – why does the Yen and Japanese Government Bonds rally whenever there is a crisis? The obvious answer was capital flows from Japan would create a bull market in the area they flowed to, and then when the Japanese pulled capital back, it would create a bear market, often with significant currency volatility. Armed with that observation, and combined with analysis of the commodity markets, we build a portfolio that was largely short emerging market and long bonds.

Since 2016, using the same analysis as above, Japanese capital flows have almost exclusively been to the US, and are an order of magnitude larger than anything seen before. And yet, US equities still power ahead, Yen remains weak, and currency volatility has been consigned to the history books. Of course, I asked myself why this is. Why did a model that worked so well, for the best part of 25 years, stop working?

The obvious answer is that central banks led Quantitative Easing (QE). But that answer alone seems insufficient to me. Japan has had low interest rates for years and was still racked by bouts of extreme equity and currency volatility. The other problem with that answer is that the big inflation spike seen this year should then lead to greater volatility in equities, especially as central banks dial back QE programs.

The answer for me comes from China. China wants a strong currency, and to keep consumption strong. It seems to me that the Chinese government uses it extraordinary control of the economy to control activity and the currency through the commodity markets. To elaborate, I expected China to post a weak trade surplus in October, and for currency devaluation fears to spike (particularly after the recent Evergrande selloff). Chinese trade surplus was actually very strong. And it was strong because Chinese imports of oil and iron ore were down significantly. Chinese steel production was down a stunning 20% year on year, a number you would typically only see in a bad recession.

China has effectively taken control of key commodities, and now adjusts volumes to suit its own needs. Taking all this volatility through physical markets, has essentially collapsed financial market volatility, and also led to commodity currencies being significantly weaker than commodity prices – which has been a problem for me this year.

Now I understand this, non-obvious trades at the beginning of the year such as long oil, short iron ore now seem obvious. The surprising weakness of gold and other precious metals can make sense in this analysis. It also explains why the extraordinary fiscal and monetary policies of the US have not been met with greater commodity or bond turbulence. It is very hard for me to get bearish US treasuries when I see Chinese steel production down 20% year on year.

The big question then is whether this Chinese policy of absorbing financial risk in the physical economy sustainable? History suggests not, as most countries prefer to devalue than slow economic growth. However, I can see reasons why China may continue with this policy. The most powerful is that with US policymakers seemingly unable to raise interest rates, or balance budgets there is a gap in the market for a credible currency. Is China making a play for reserve currency status?

Give me an economic problem, then I can properly gauge risk. Give me a Chinese political problem – I am taking a guess as much as the next person. Did I think Alibaba was going to fall 50% this year? No, not until the Chinese government told me to think that way. Is Alibaba a good short now? I have no idea, and like everyone else will have to wait to see what the Chinese government says.

So, I think it time to step back, have a think about where we are going, and then come back when I can see an opportunity for my skill set. Perhaps that’s never, but I doubt it. The only constant in life is change. This will be my final newsletter and it just leaves me to thank you for your support and wish you all the success in the future. From a personal perspective I plan to keep producing research, so keep an eye out for my future notes. Russell.