Yesterday we reported that the world’s biggest IPO – that of Jack Ma’s fintech giant Ant Group – which priced on Monday at a valuation of over $320 billion and which will raise $34 billion in new capital, is set to break for trading later this week.

Earlier today, Bloomberg reported that Ant Group’s bankers would stop taking investor orders for the Hong Kong leg of the IPO a day earlier than scheduled as the record stock sale has already been heavily subscribed. According to the report, demand has been so great the Hangzhou-based firm is set to close the institutional investor. The company was initially planning to close the Hong Kong book at 5 p.m. Thursday for each region globally. The potential move would bring the closing in line with the Shanghai leg.

As a reminder, the financial technology company, which is controlled by Alibaba’s billionaire founder Jack Ma, priced its Shanghai stock at 68.8 yuan ($10.27) apiece and its Hong Kong shares at HK$80 ($10.32) each, valuing the company at about $280 billion before it makes its market debut on November 5. Those sums would eclipse the $25 billion raised in 2014 by its former parent Alibaba and the $29.4 billion of shares sold more recently by Saudi Aramco, in what is to date the largest-ever IPO. 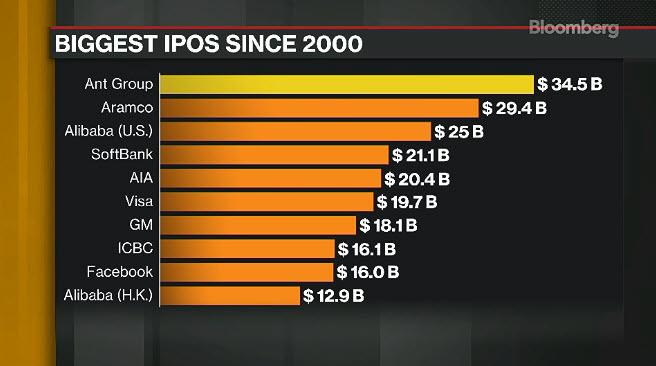 So just how big was investor demand? Well, according to Ant’s Shanghai offering announcement in the preliminary price consultation of its Shanghai IPO, institutional investors subscribed for over 76 billion shares, which means it is more than 284 times oversubscribed!

Things are just as frothy in neighboring Hong Kong, where a late Tuesday update revealed that the retail portion of Ant’s Hong Kong IPO has been 64 times oversubscribed so far, Hong Kong Economic Journal reports, citing data from banks and brokerages. Ant is offering 41.8 million H shares, at HK$80 apiece, for retail investors in Hong Kong.

These are staggering numbers, unprecedented for most Western IPOs. How are they possible?

It turns out the answer is quite simple: local banks are showering potential buyers with margin loans, just to make sure that the stock soars after it opens for trading.

According to SCMP, Hong Kong’s banks and brokers are offering record margin loans of almost HK$300 billion (US$38.7 billion) for retail investors to buy into the IPO. HSBC, Hong Kong’s biggest bank, is ready with an IPO lending capacity of over HK$100 billion to support retail investors subscribing to the mammoth flotation, according to a statement from the lender issued on Friday. At the same time, Bright Smart Securities, the biggest local broker to offer IPO margin financing, is prepared to lend HK$50 billion to customers wanting a slice of the action. Other banks such as Bank of China (Hong Kong), Hang Seng Bank as well as many of the 600 local stockbrokers have prepared over HK$150 billion for their customers to borrow for the red hot IPO, brokers estimate.

But wait, if banks are basically giving out hundreds of billions in loans, do retail investors have to put up any capital?

According to SCMP, Huatai International, the Hong Kong arm of the fourth-largest mainland securities house, will lend at 33 times leverage for Ant’s IPO, meaning an investor would only need to put down roughly HK$3 as a deposit to borrow every HK$100 they borrow.

It’s not just banks: brokerages are also seeking to attract business by offering leverage to retail clients applying for Ant’s shares. Online brokerage Tiger Brokers said apart from a lending capacity of “several tens of billion” dollars, it will offer 20 times leverage to investors to subscribe to Ant’s IPO.

This is absolute bubblelicious insanity, and it explains not only why the Ant IPO is so massively oversubscribed, but why the stock will shoot up on the first day of trading. The reason: because this particular IPO is nothing but a government mandated ponzi scheme, one in which state-owned banks give loans to retail investors who have to put almost no capital of their own down, to ensure there is massive demand for a stock which, by going public just days before the election, has a special political appeal to it: it is meant to symbolize China’s superiority over the US.

And since retail investors are basically getting a free ride, institutional investors have zero downside and are also piling in for what is effectively a risk-free flip. According to the SCMP, “overseas investors are piling funding into Hong Kong ahead of the listing, as they jostle for a piece of the deal. More than HK$211.52 billion has flowed into the city since September 14, forcing the Hong Kong Monetary Authority, the de facto central bank, to intervene 41 times to try to weaken the Hong Kong dollar.“ 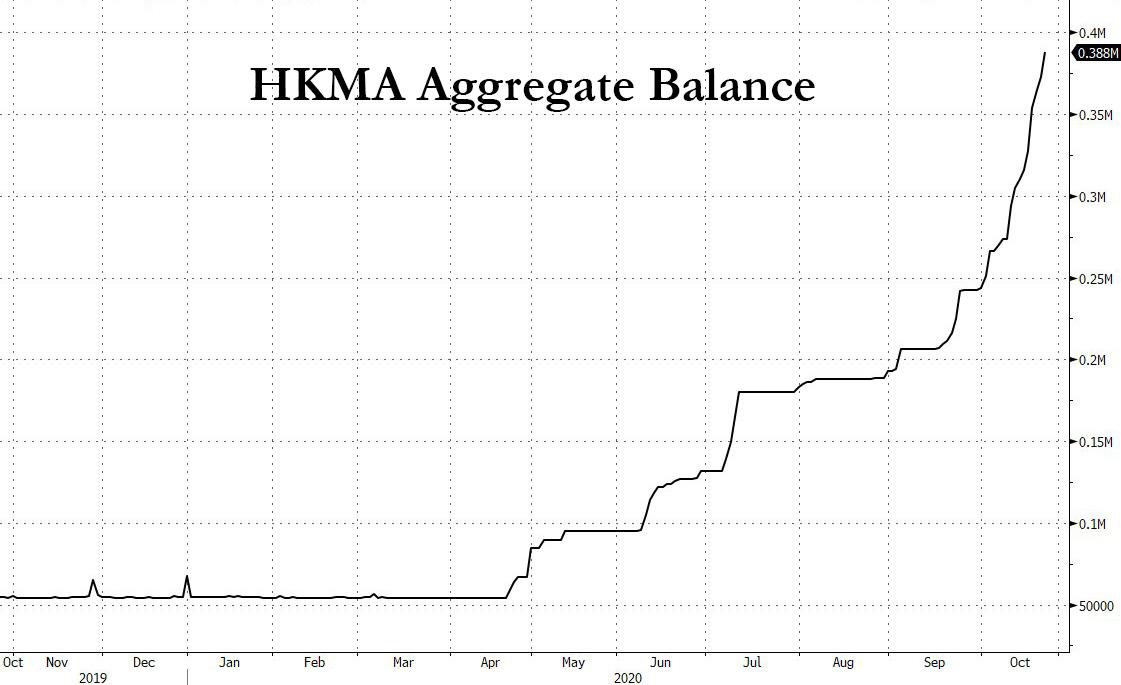 This is also why contrary to the expectations by China skeptics such as Kyle Bass, Hong Kong’s fund flows continue to flood into the territory rather than out, because China has figured out that the simplest way to ensure it never has a dollar shortage is to guarantee that foreign investors will always make money on such massive equity offerings.

And as long as China has companies that go public – and are 100x+ or more oversubscribed – the foreign capital inflows will continue. Which is the Ant IPO is about so much more than the world’s biggest IPO – it explains how HK, and by extension China, funnels foreign (mostly dollar) capital to make sure that there is never a full-blown run on the world’s reserve currency.