Which Countries Have The Worlds Largest Proven Oil Reserves?

The world derives over a third of its total energy production from oil, more than any other source by far; and, as Visual Capitalist’s Anshool Deshmukh details below, as a result, the countries that control the world’s oil reserves often have disproportionate geopolitical and economic power. 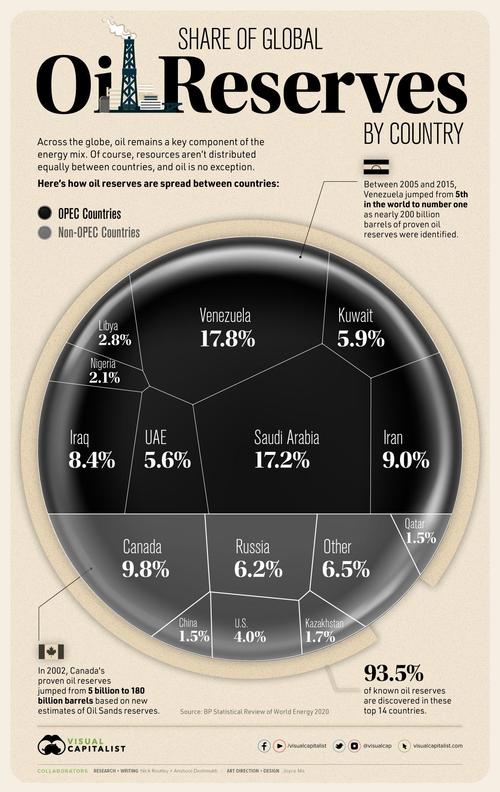 At the end of 2019, the world had 1.73 trillion barrels of oil reserves. Here are the 14 countries with at least a 1% share of global proven oil reserves: 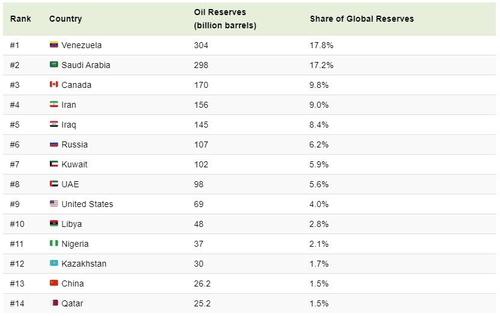 A country with large amounts of reserves does not always translate to strong production numbers for petroleum, oil, and by-products. Oil reserves simply serve as an estimate of the amount of economically recoverable crude oil in a particular region. To qualify, these reserves must have the potential of being extracted under current technological constraints.

While countries like the U.S. and Russia are low on the list of oil reserves, they rank highly in terms of oil production. More than 95 million barrels of oil were produced globally every day in 2019, and the U.S., Saudi Arabia, and Russia are among the world’s top oil-producing countries, respectively.

Venezuela has long been an oil-producing country with heavy economic reliance on oil exports. However, in 2011, Venezuela’s energy and oil ministry announced an unprecedented increase in proven oil reserves as oil sands in the Orinoco Belt territory were certified.

Canada accounts for almost 10% of the world’s proven oil reserves at 170 billion barrels, with an estimated 166.3 billion located in Alberta’s oil sands, and the rest found in conventional, offshore, and tight oil formations.

The Organization of the Petroleum Exporting Countries (OPEC) is an intergovernmental global petroleum and oil distribution agency headquartered in Vienna, Austria.

The majority of countries with the largest oil reserves in the world are members of OPEC. Now composed of 14 member states, OPEC holds nearly 70% of crude oil reserves worldwide.

Most OPEC countries are in the Middle East, the region with the largest oil reserves, holding nearly half of the global share.

Though most of the proven oil reserves in the world were historically considered to be centered in the Middle East, in the past three decades their share of global oil reserves has dropped, from over 60% in 1992 to about 48% in 2019.

One of the main reasons for this drop was constant oil production and greater reserves discovered in the Americas. By 2012, Central and South America’s share had more than doubled and has remained just under 20% in the years since.

While oil sands ushered in a new era of global oil reserve domination, as the world shifts away from oil consumption and towards green energy and electrification, these reserves might not matter as much in the future as they once did.