Visualizing Where COVID-19 Is Rising And Falling Around The World

It’s been just over two months since New York declared a state of emergency, and global stock markets were hammered as the fears of a full-blown crisis began to take hold.

Since then, we’ve seen detailed, daily coronavirus coverage in most of the major news outlets, and Visual Capitalist’s Nick Routley notes, with such a wealth of information available, it can be hard to keep track of the big picture of what’s happening around the world.

Today’s graphic, adapted from Information is Beautiful, is an efficient look at where the virus is fading away, and where new infection hotspots are emerging. 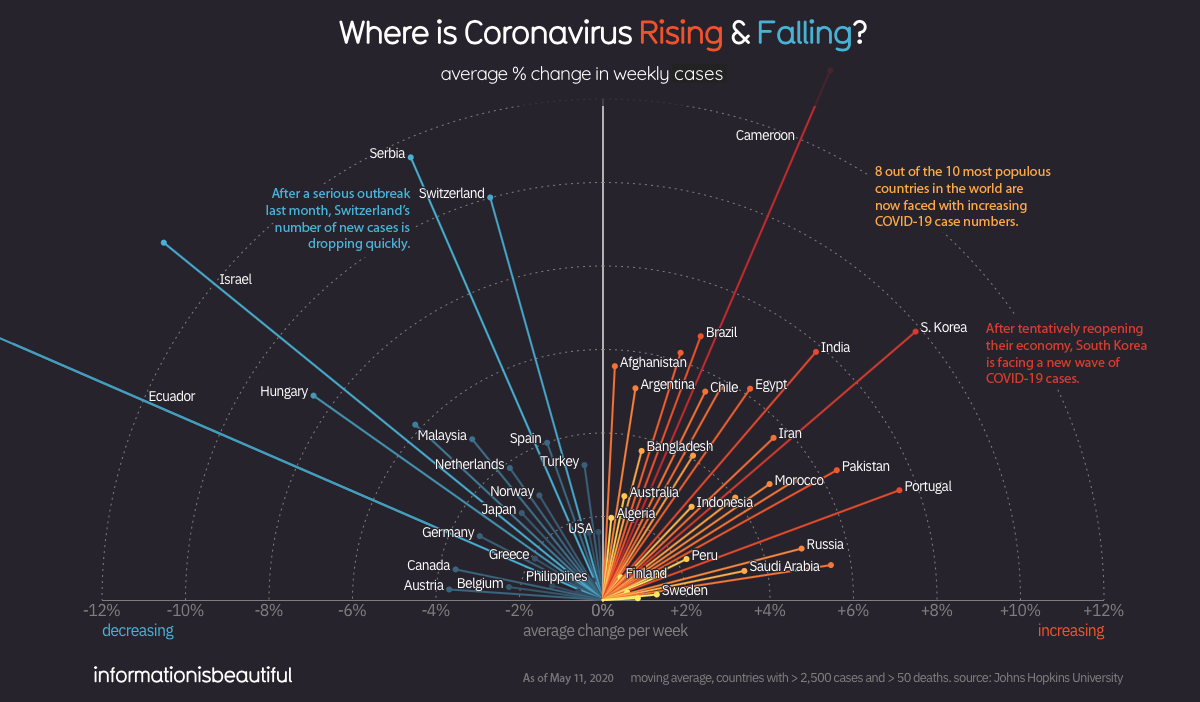 The Ebb and Flow of Coronavirus Cases

First, the good news: the number of new confirmed COVID-19 cases has started to level off on a global basis. This metric was rising rapidly until the beginning of April — but since then, it has plateaued and is holding steady (for now).

Of course, the global total doesn’t tell the whole story. Different countries, and even regions within countries, are in very different phases of dealing with the pandemic.

Let’s look at the current situation around the world.

Many of the countries that experienced early outbreaks of COVID-19 are now seeing a drop-off in the number of new cases.

Italy, which experienced one of the most severe outbreaks, is finally emerging from the world’s longest nationwide lockdown. Switzerland and the Netherlands both had some of the highest confirmed case rates per capita, but are now in better situations as fresh cases drop off.

The narrow, pointy curves exhibited by New Zealand and Austria give us an indication of where containment measures were successful at curbing the spread of the virus. This type of pronounced curve is less common, and is generally seen in nations with smaller populations.

For many of the world’s major economies, containing the spread of the virus has proven exceptionally difficult. Despite increased testing and lockdown measures, the United States still has one of the steepest infection trajectory curves. The UK also has a very similar new case curve.

Even as countries’ curves begin to flatten and level off, there is still a danger of new flare-ups of the virus – as is now the case in South Korea and China. Even in Singapore, which saw early success in containing the virus, is experiencing a rise in new COVID-19 cases.

Some countries – particularly developing economies – are only in the beginning stages of facing COVID-19’s rapid spread. This is a cause for concern, as many of the countries with steeply rising curves have larger populations and fewer resources to deal with a pandemic.

In late March, as the virus was spreading rapidly through Europe, Russia appeared to have avoided an outbreak within its borders. Today, however, that situation is much different. Russia has the world’s steepest infection trajectory curve, with the number of cases on a course to double roughly every five days.

The countries in the image above have a combined population of 2.8 billion people, so as COVID-19 continues to spread through those countries, the eyes of the world will be watching.