The executive director of the Bethany-Fenwick Chamber of Commerce, Lauren Weaver, told USA Today that “our businesses (located on the southern tip of the Delmarva Peninsula) have 12 weeks to make money to survive the rest of the year…  sales for the town’s 75 or so beach-district merchants are down 40% to 70% compared with a year ago.” 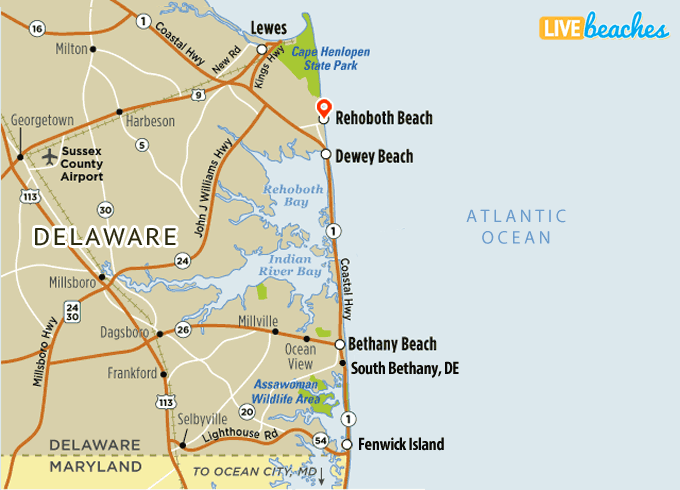 Weaver warned: “A lot of them are not going to survive” this season.

Bethany-Fenwick is an upscale beach community, home to wealthy elites, such as Joe Biden.

The virus pandemic has made it challenging for local businesses to operate, many of whom only make money during the summer months.

Down the street, about 20 minutes south, revenue for businesses in Ocean City, Maryland, is down 20% to 25%, said Susan Jones, head of the Ocean City Hotel-Motel-Restaurant Association.

Jones said the city’s decision to reopen beaches in early May despite the virus pandemic helped businesses survive. She said this year is a not a profitability story, but rather a breakeven story.

Back to Rehoboth and Dewey Beaches, which are a string of beach towns that generate more than $3.5 billion in annual revenue, according to Southern Delaware Tourism. Much of the area is dependent on travel and tourism.

It may look a bit different this year – but we’re still here! …on the beach off Garfield Parkway (beach entrance – south).

Join us at 6am every day (weather permitting) ☀️🏖🐬 pic.twitter.com/ohB2tYg6Dn

Bethany was shut down for 2.5 months to mitigate the virus spread, reopened in early June with stores and restaurants operating at 30% capacity. Capacity has doubled to 60% in July; the recovery, however, is anything but smooth.

The reopening of eateries in Dewey has been rough. Gov. John Carney had to shut down restaurants before July 4 holiday, one of the biggest revenue days of the year for businesses in the area, after tourists tested positive for COVID-19.

The Bethany Beach Ocean Suites Hotel said the average summer rate is $799 per night, has been dramatically reduced following a rash of cancellations.

Alex Heidenberger, who co-owns Mango’s eatery in Bethany, said he “cried” when the governor decided to shut restaurants ahead of July 4th weekend.

Heidenberger said, “Mango’s revenue fell by $300,000 in the weeks before and after July 4, accounting for the bulk of the $400,000 in losses the restaurant has sustained during the crisis.”

“To take two steps back, that is the worst possible scenario,” said Heidenberger.

During the good times, he said the restaurant made $200,000 per week in sales, and around $2 million in summer revenue. This summer, he said, Mango’s sales have been halved.

“It’s really devastating us,” he said. “I’m operating at a loss,” adding that, “every day is a new challenge — it’s just exhausting.”

Heidenberger said he hasn’t paid the mortgage in four months. Profitability at the restaurant has collapsed. With the beach town in crisis, he has had to serve as a lifeguard on the beach as a shortage in beach crew was due to lockdowns.

“I’m working harder than I have ever worked in my life,” he said, adding that he puts in about 80 hours a week at the two restaurants. Yet, “I have no money… This is all I think about. I don’t sleep.”

He wasn’t sure if Mango’s was going to make it through the summer:

“I don’t know what the future is going to be,” Heidenberger said, noting his family already has closed two restaurants in D.C. as a result of the pandemic. At the same time, he said, “This is all I know. This is what I love.”

A similar collapse is happening in beach communities in California, Florida, New Jersey, and Texas.