In a rare comment about potentially boycotting American products, China’s foreign ministry spokesman warned Friday if the Trump administration goes ahead with a ban on the popular messaging app WeChat, from mid-September on, then it would result in Chinese consumers ditching iPhones and other Apple products.

“If WeChat is banned, then there will be no reason why Chinese shall keep iPhone and apple products,” Foreign Ministry spokesman Zhao Lijan tweeted.

If WeChat is banned, then there will be no reason why Chinese shall keep iPhone and apple products. pic.twitter.com/qkKuMNQ87f

President Trump’s executive order banning WeChat in the coming weeks would not just stoke further tensions between both superpowers, but also could lead to a massive hit for the world’s most valuable company, Apple.

Lijan said, “many Chinese people are saying they may stop using iPhones if WeChat is banned in the U.S.” He accused Washington of “systematic economic bullying of non-US companies” by targeting the popular messaging app. 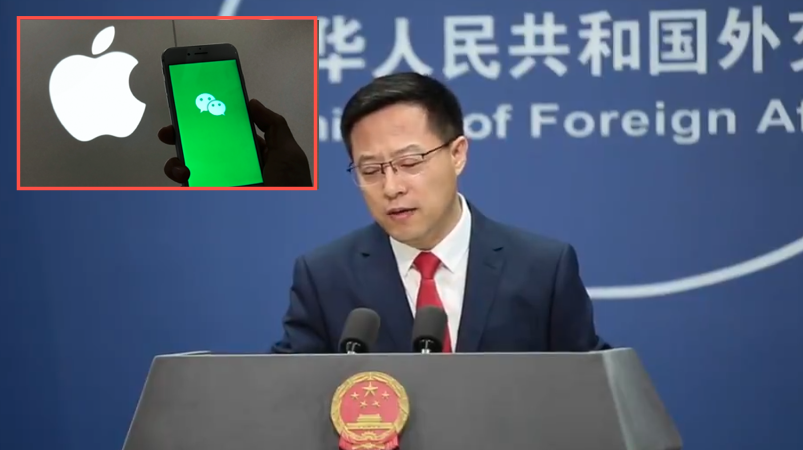 The comments of a top Chinese official addressing a potential boycott of American products, nevertheless, ones from Apple, sheds light on the spillover of tensions from the blame of the virus pandemic to lack of buying under the Phase One Trade deal to the rapid increase in military activity in the South China Sea.

T.F. International Securities’ Ming-Chi Kuo laid out in a note, the potential impact on Apple sales if a WeChat ban was seen. He said the hit would be absolutely devastating for Apple, resulting in a possible 25-30% annual decline in global phone shipments.

“Because WeChat has become a daily necessity in China, integrating functions such as messaging, payment, e-commerce, social networking, news reading, and productivity, if this is the case, we believe that Apple’s hardware product shipments in the Chinese market will decline significantly. We estimate that the annual ‌iPhone‌ shipments will be revised down by 25–30%, and the annual shipments of other Apple hardware devices, including AirPods, iPad, Apple Watch, and Mac, will be revised down by 15–25%,” Kuo said in an early August note.

Asia Times quoted Weibo users who said upon a WeChat ban – they would unanimously ditch their iPhones:

“I use Apple, but I also love my country,” one Weibo user said. “It’s not a conflict.”

“No matter how good Apple is, it’s just a phone. It can be replaced, but WeChat is different,” another user said. “Modern Chinese people will lose their soul if they leave WeChat, especially business people.”

While the Trump administration is gung ho about decoupling American and Chinese economies, the American Chamber of Commerce in Shanghai recently warned of an “enormous negative impact” on U.S. companies with international exposure to WeChat’s more than 1.2 billion active users if a ban was seen.