The Top 10 Absurdities Of The COVID Pandemic… So Far

Authored by PF Whalen via TheBlueStateConservative.com,

President Joe Biden and the Democratic Party may be in denial, but the truth is unavoidable. For all intents and purposes, the COVID-19 pandemic which has ravaged our country and our economy for fourteen months is over. As we prepare to close the book on the nightmare it has been, let’s pause for a moment with the Top Ten list for the Month of May to reflect on some of the most ridiculous aspects of the handling of the coronavirus outbreak. 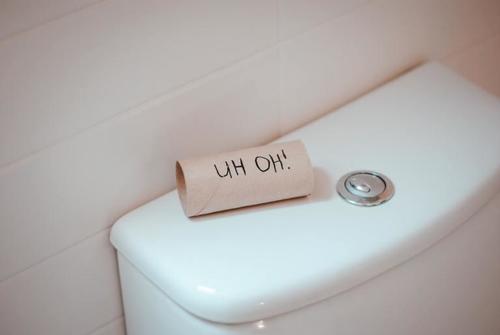 At the beginning of the pandemic – when we were still making jokes about coronavirus and Corona beer – there was a lot of confusion. As the magnitude of COVID became clear, people were erring on the side of caution; fair enough. But over a year into this thing, we can still see signage in stores telling us which direction to push our carts. If anyone ever abided by these rules, it was only for a short while, and that was a long time ago. If you were one of those people who tried to scold me for going the wrong way down an aisle last June, to which I told you, “shut the hell up,” I’m still not sorry. Here’s a prediction: no one will bother to conduct a study on exactly how many lives were saved by one-way supermarket traffic. And if an accurate analysis does come along it will arrive at this conclusion: Zero.

Throughout the presidential campaign, the left and their media hammered away at this point. If Trump had acted properly, the pandemic never would have happened. Trump is responsible for every death. There are hundreds of thousands dead because of Trump. Somehow, a substantial portion of the electorate bought into the nonsense. It’s a virus, and a highly infectious one at that. Trump did what he could, and in fact initially received praise from just about every Democratic governor in the country. If anyone is to blame for COVID, it’s China and the World Health Organization. But perhaps nothing better illustrates the ridiculousness of this claim than when Joe Biden, less than a week after taking office, explained, “There’s nothing we can do” about the virus. Well, I’ll be darned. 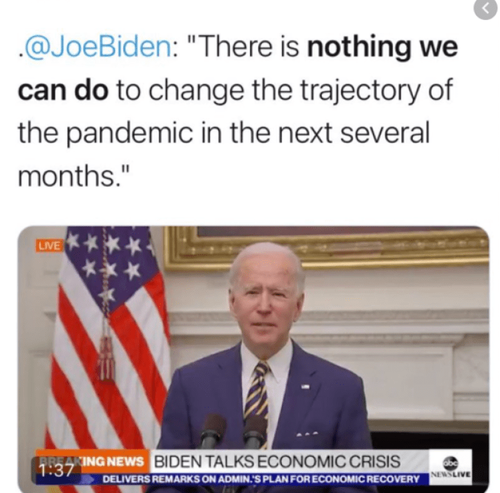 “Remember all those times I said I was going to kick COVID’s ass? Well, I’m going back to my basement to hang out with Corn Pop now.”

#8 – Teachers can’t go back to work, but everyone else can –

From virtually the very beginning of the pandemic, it was clear that school-aged children were far less susceptible to infection and severe symptoms, and probably not vectors of transmission. Statistically, kids are the least in danger. But while the rest of us were back working in stores or driving trucks, and subjecting ourselves to genuine risks, teachers’ unions across the country continued to push the narrative that it’s too dangerous for teachers and kids to return to school. Like every other industry, at-risk kids and teachers could have been allowed to stay at home while the rest went back to normal. Instead, we inexplicably kept schools closed, gave students a significantly inferior education, and took away opportunities for social interactions that will never come again. 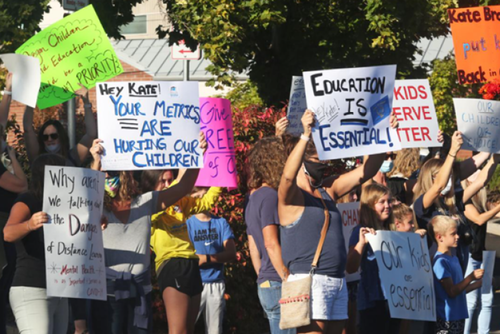 Finally parents became fed up with school closings, but far too many Americans nodded in agreement and played along

#7 – It was xenophobic for Trump to halt travel from China  –

The media would prefer that we all forget their accusations, but we mustn’t. They called President Trump “xenophobe in chief” for his actions, and Nancy Pelosi went to San Francisco’s Chinatown in February to tell everyone how safe things were. Trump had suspended travel from China at the end of January, and in retrospect the only legitimate criticism you could make of Trump is that he waited too long. But to categorize his actions as xenophobic was absurd from the beginning. The virus came from China, and that’s a fact; and it’s not racist or xenophobic to point it out or to act accordingly. 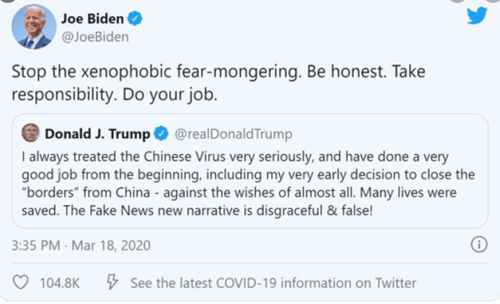 If your policies don’t work, just call the other guy (who happens to be married to an immigrant) a xenophobe

The idea itself isn’t absurd at all, and in fact it originated with the Trump White House. We didn’t know the trajectory of the disease in mid-March 2020 when the initiative began; we didn’t want to overwhelm hospitals, and we needed to “flatten the curve.” It took closer to 30 days to reach the goal, but we succeeded, and we achieved those objectives. There wasn’t a location in the country where COVID patients couldn’t access care, and we indeed flattened the curve. What’s absurd is that the approach has continued for almost 400 days now in some places. Many states such as Texas, Florida and Mississippi have been essentially back to normal for months, but other states (mostly of the Blue variety) can’t bear to let go of that power, as lockdowns and mask-mandates continue. 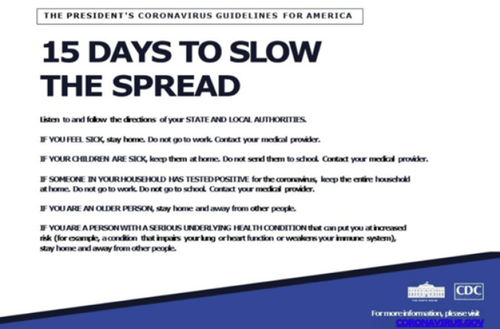 The claim came in December before he took office, and much of the rhetoric was focused on the economic impact on COVID, but Biden repeatedly made assertions that he would “fix” the federal government’s handling of COVID. By the time Biden was inaugurated, there were already one million vaccinations occurring each day, and one of his first promises was to achieve 100 million vaccinations in the first 100 days, which would have meant actually decreasing the trend graph for vaccines. Way to set the bar low, Joe. Essentially the only issue in which the Biden Administration has approached COVID differently from Trump is with their authoritarian fixation on masks. That’s it. 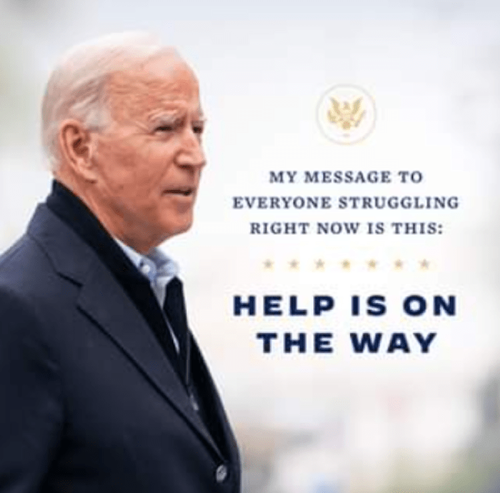 Rest easy America, Joe Biden is coming to save us

#4 – The response by The World Health Organization –

Prior to COVID, most Americans were only vaguely aware of the WHO and their efforts. If we heard, “The WHO,” we would immediately think of Roger Daltrey swinging his microphone and Pete Townshend smashing his guitar. Once we learned how they screwed the pooch with the early days of the pandemic, and of their coziness with China, everyone started paying attention. The virus likely originated at the lab in Wuhan – though probably unintentionally – and China thoroughly mishandled the initial infections. Once the virus began spreading, the WHO provided cover for the Chinese by downplaying the extent of the spread and China’s role in it. The organization which gets much of its funding from our tax dollars was in bed with China and covering up their incompetence. President Trump was absolutely correct in pulling our funding, and if Biden had an ounce of integrity he’d do the same thing. 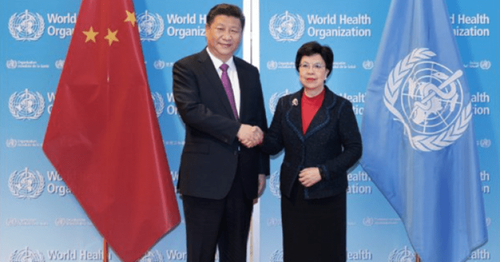 The media spent the first six months of the pandemic essentially engaging in journalistic copulation with Democratic governors like New York’s Andrew Cuomo, while simultaneously vilifying and openly rooting against Republican governors like Florida’s Ron DeSantis. DeSantis would “have blood on his hands” they told us, while concurrently paving the way for issuing an Emmy Award for Cuomo. In reality, the performances were the exact opposite of their narrative. Cuomo was dreadful in his handling of nursing homes in New York, and it was clear from the beginning he was covering up the results; a scandal which may eventually result in his removal from office. Meanwhile DeSantis was stellar in managing the virus in a state with the second oldest population in the country. The worst four states in the country for deaths-per-million are all blue states (#1 New Jersey, #2 New York, #3 Massachusetts, and #4 Rhode Island), and Florida is in the bottom half of that list and going lower. Democrats, unsurprisingly, were absolutely horrible in their handling of COVID, whereas Republicans did pretty well overall. 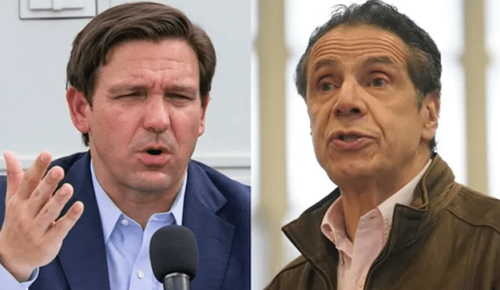 This is some of the most bizarre messaging we’ve ever seen. We were blessed with three miracles: the vaccines by Pfizer, Moderna, and J&J. All three are not only highly effective at stopping infections, with efficacies of between 75% and 94%, they’re almost 100% effective at preventing hospitalization and death in the unlikely scenario you are infected. So what did Biden and the Democrats do? They told everyone that even if you’re vaccinated you need to keep social distancing and keep wearing masks. Those communications begged the question: if I have to keep doing all that stuff, then why should I get the shots? None of it made any sense. If you get vaccinated: 1) it’s highly unlikely you’ll get infected, 2) you’re almost definitely not going to be hospitalized or die from it if you do, and 3) you will not be able to transmit the disease. In other words, if you get the vaccine you can go back to normal. 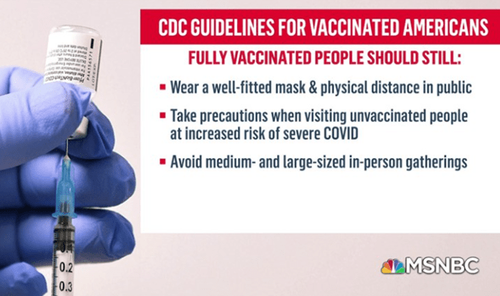 Democratic Party propaganda, brought to you by their sycophants in the media

The beginning of the pandemic was chaotic, and it would have been understandable if Dr. Anthony Fauci had simply made a mistake when he told us we didn’t need masks. But it wasn’t a mistake. He lied to us and admitted doing so. Fauci justified his deceit by claiming concern that masks might not be available for health care professionals. Then Fauci decided to stop lying to us and told us to wear masks, but wouldn’t even follow his own directive. Fauci threw out the first pitch at the Washington Nationals opening game last year, and forget that he threw the ball like a little girl; which, if anything, is insulting to little girls. He was wearing a mask despite the nearest person being sixty feet away. He then proceeded to sit in the stands directly next to a friend, at which point he removed his mask. Then late last year Fauci decided that it would be best if we wore two masks, without any evidence to support his notion. Like lockdowns, there’s still no evidence that mask-wearing had a significant impact on the pandemic. Dr. Fauci has zero credibility at this point, and if you’re following this recommendation by wearing two masks, then you are a moron. 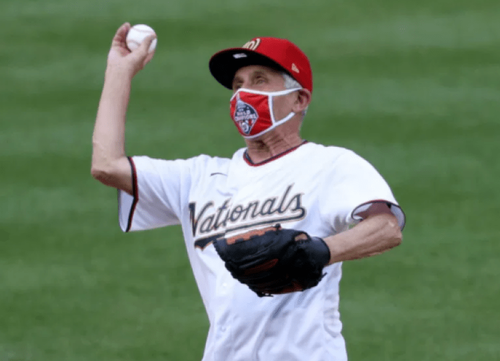 The estimable Dr. Anthony Fauci, in a scene worthy of The Sandlot