The Sell-Off Is Overdone… The Correction May Not Be

Authored by Lance Roberts via RealInvestmentAdvice.com,

Over the last couple of weeks, we have been discussing the ongoing market correction. As shown below, the sell-off has been orderly and not one of a “panic” induced decline. 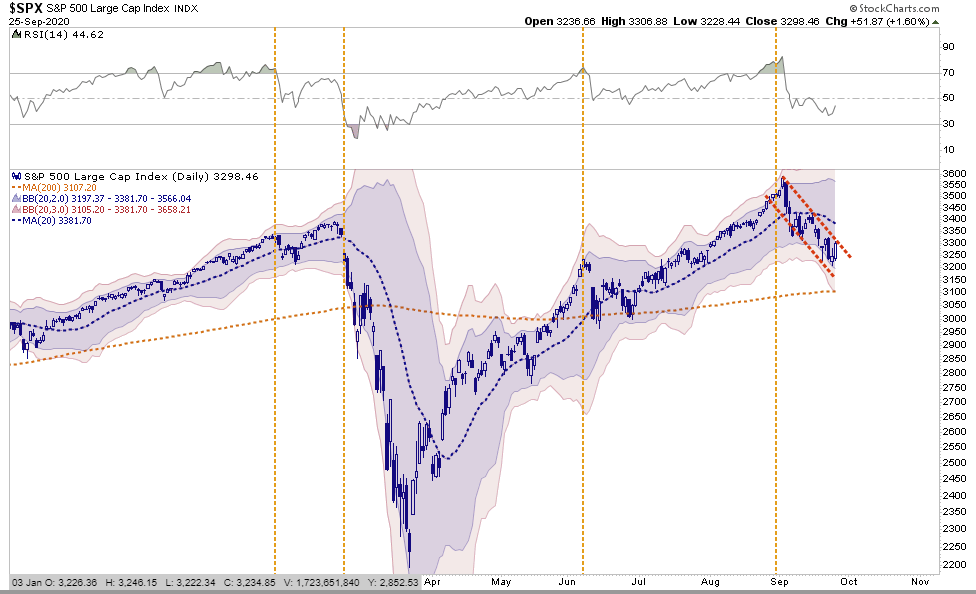 The market did retrace from the top of the 2-standard deviation range to the bottom, which is part of a healthy correction process. As we noted last week, the correction also aligns with the historical weakness seen in September and October, particularly in years preceding an election.

Importantly, given there was no sharp rise in volatility, such also confirms this was a more orderly and healthy market retracement.

While the sell-off in the market has gotten overdone short-term, we still suggest using rallies back to the 50-dma to rebalance portfolio risks. Look at the first chart above. The market is currently in a very defined downtrend. Friday’s march failed to break out of that resistance.

In the chart below, we see the market rallied back to the previous consolidation lows with the 20-dma approaching a cross of the 50-dma. Such would suggest more downward pressure on prices short-term. The 200-dma is roughly 7% lower from Friday’s close. 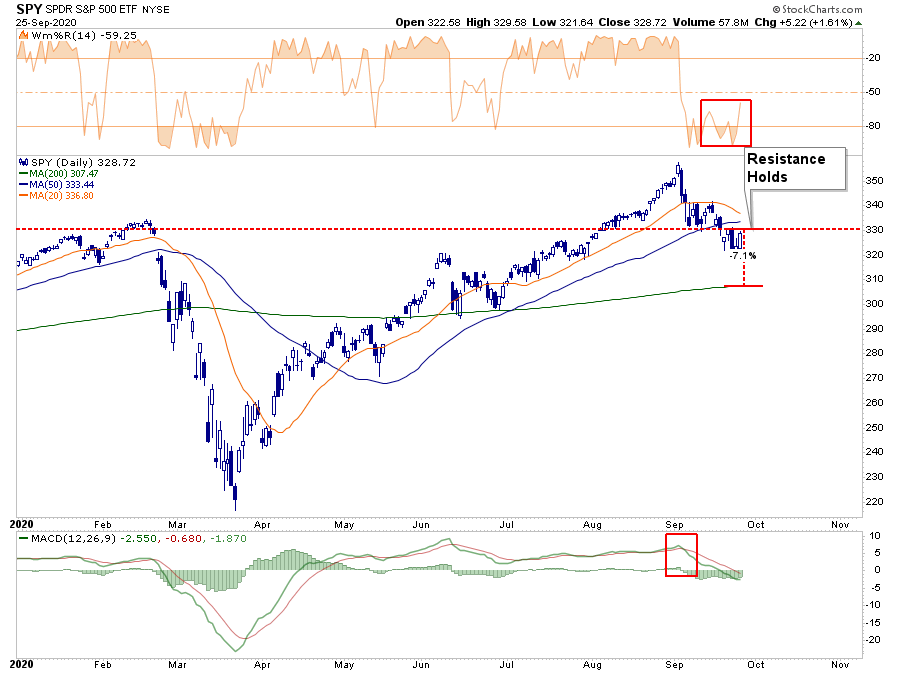 If the market can break above resistance on Monday, clear the 50- and 20-dma’s, then old highs should not be an issue.

But that will take a fair bit of work at a time where market risks have increased.

Is The Fed Done?

“Federal Reserve Board Chairman Jerome Powell warned Wednesday that a lack of further fiscal support from Congress and President Trump could “scar and damage” a U.S. economy restrained by the coronavirus pandemic.” – The Hill

Such is an interesting position from the head of the Central Bank who has flooded the system with liquidity. The chart below is a bit dated but shows the rather tepid uptake of emergency measures. 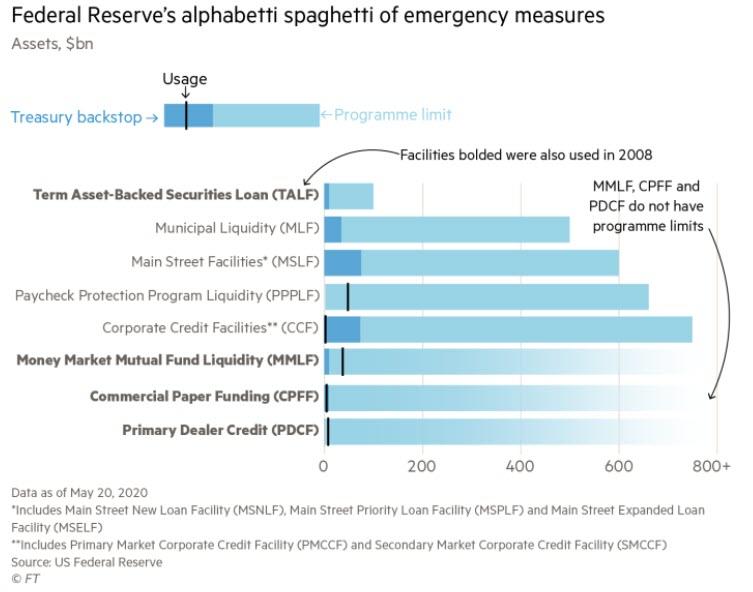 The reason the usage of the programs is so low is two-fold.

The second point is more important. While the Federal Reserve can calm and support public markets, they have little impact on the non-public markets. The real crisis is in small and medium-sized businesses that do not have access to public markets, either equity or debt, to raise needed capital.

The large pool of non-public businesses are facing large amounts of devastation currently, and the “death rate” of small businesses is rising to nearly 50%. Given that small businesses make up roughly half of the employment in the U.S., this is no trivial matter.

The Federal Reserve is trying to plug a hole that fiscal policy was widely expected to fill by now. However, the Fed’s ability to expand on current programs is limited to the Treasury Department’s issuance of additional debt. Without another “fiscal relief” bill, there isn’t enough debt issuance to support another round of interventions by the Fed.

Currently, the Federal Reserve is continuing to run “Quantitative Easing” at $120 billion per month, but much of that is just replacing bills that are maturing. As shown below, the Fed’s balance sheet has been stagnating since June as the uptake from its various programs has waned. 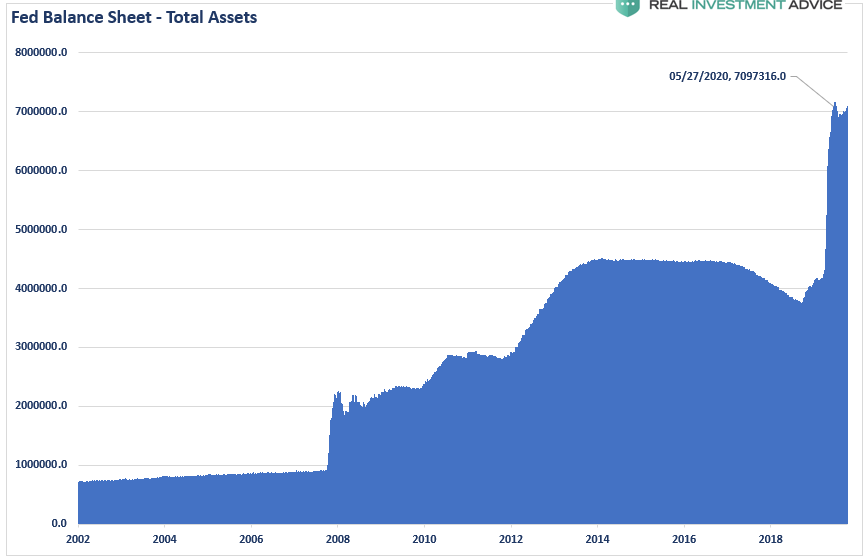 Subsequently, excess bank reserves, which have supported the market recovery from the March lows, have also peaked. 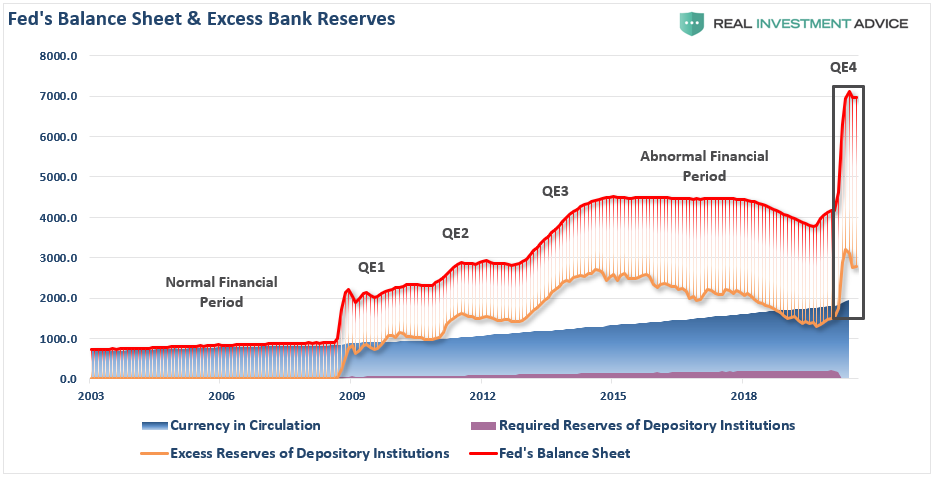 While the Federal Reserve could undoubtedly begin to more bonds in the open market, they realize they run the risk of disrupting the credit market by becoming too big of a buyer. The Fed has previously warned they did not want to disrupt markets in this manner.

As noted by Zerohedge on Friday:

“Two weeks ago, when the Fed published its latest monthly breakdown of purchases Secondary Market Corporate Credit Facility which shockingly showed that in the entire month of August, the Fed had not purchased a single corporate bond ETF and had barely purchased any corporate bonds in the open market, we asked if Powell was ‘sending the market as message.’

In the subsequent two weeks, which saw a sharp drop in risk assets and the Nasdaq sliding into a 10% correction, coupled with a modest rout across the corporate bond sector, many had expected the Fed to revert to its role as custodian of market stability and ramp up its purchases of corporate bonds, if for no other reason then to assure investors that Uncle Jerome was still watching over everyone.

So in what may come as a big surprise to all those praying for the Fed to bail them out, or to at least telegraph that he is keeping an eye on the current tech-led market mess, Powell did no such thing and in fact the Fed’s latest weekly H.4.1 report showed that the corporate credit facilities held $12.911bn of corporate bonds and ETFs as of Tuesday, up a tiny $44 million from $12.867BN the prior week.” 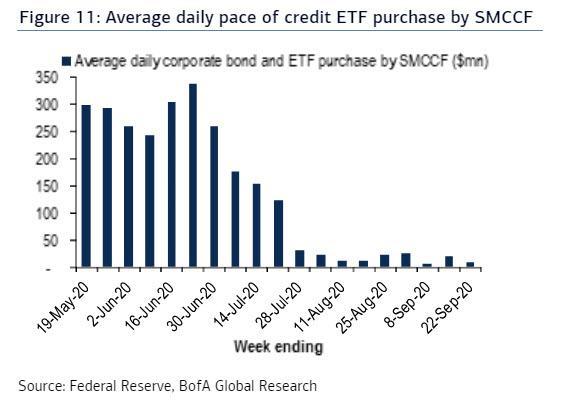 As noted, without more “fiscal” support, their “monetary” capabilities become much more limited.

Despite the Federal Reserve imploring Washington for more “fiscal” support during the last couple of speeches, it is unlikely to happen. As we discussed in Tuesday’s report “No Help Is Coming:”

“Why is this important to the market? Because Congress is facing three different events that have removed the focus from additional financial support for the economy.

Without more fiscal support, the entire premise of the “economic reflation” trade may be over. Economic data is already starting to disappoint as stimulus runs dry, and earnings estimates have begun to fall again, as I addressed last week.

“Such also correlates with weaker economic data showing up. Weaker economic data translates into reduced earnings outlooks for companies. During the last 30-days, 2021 estimates for the S&P 500 have declined by an additional $5/share. Furthermore, those estimates are down nearly $30 from the original forecast in January 2020. Yet, markets remain only slightly off all-time highs.” 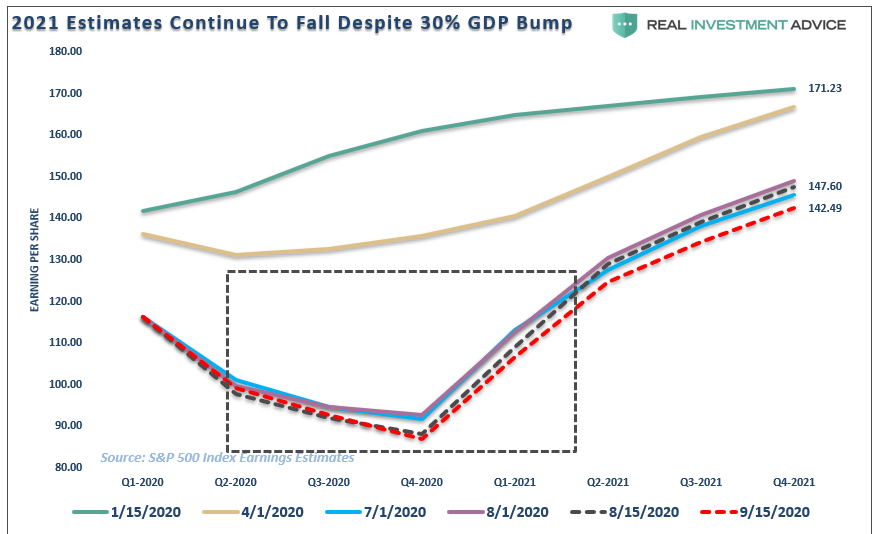 For these reasons, while the markets may indeed see a short-term bounce, the longer-term correction may not be over.

The Correction May Not Be Done

Given the challenges facing the markets over the intermediate-term from a “contested election,” a lack of financial support, a pandemic resurgence, and economic disruption, the risk of a deeper correction remain.

If we look at the weekly chart below, we find that when the market has historically broken below its short-term weekly moving average, it has, with some consistently, tested the longer-term average. Currently, that is almost 7% lower than where we closed on Friday.

Given we are still in a recessionary environment, that earnings remain weak, and the market remains rather extended from its long-term means, a deeper correction in the months ahead is certainly not out of the question.

Investors will likely benefit from maintaining caution in portfolios and continuing to use rallies to rebalance risks accordingly.