By Matt Taibbi, via SubStack 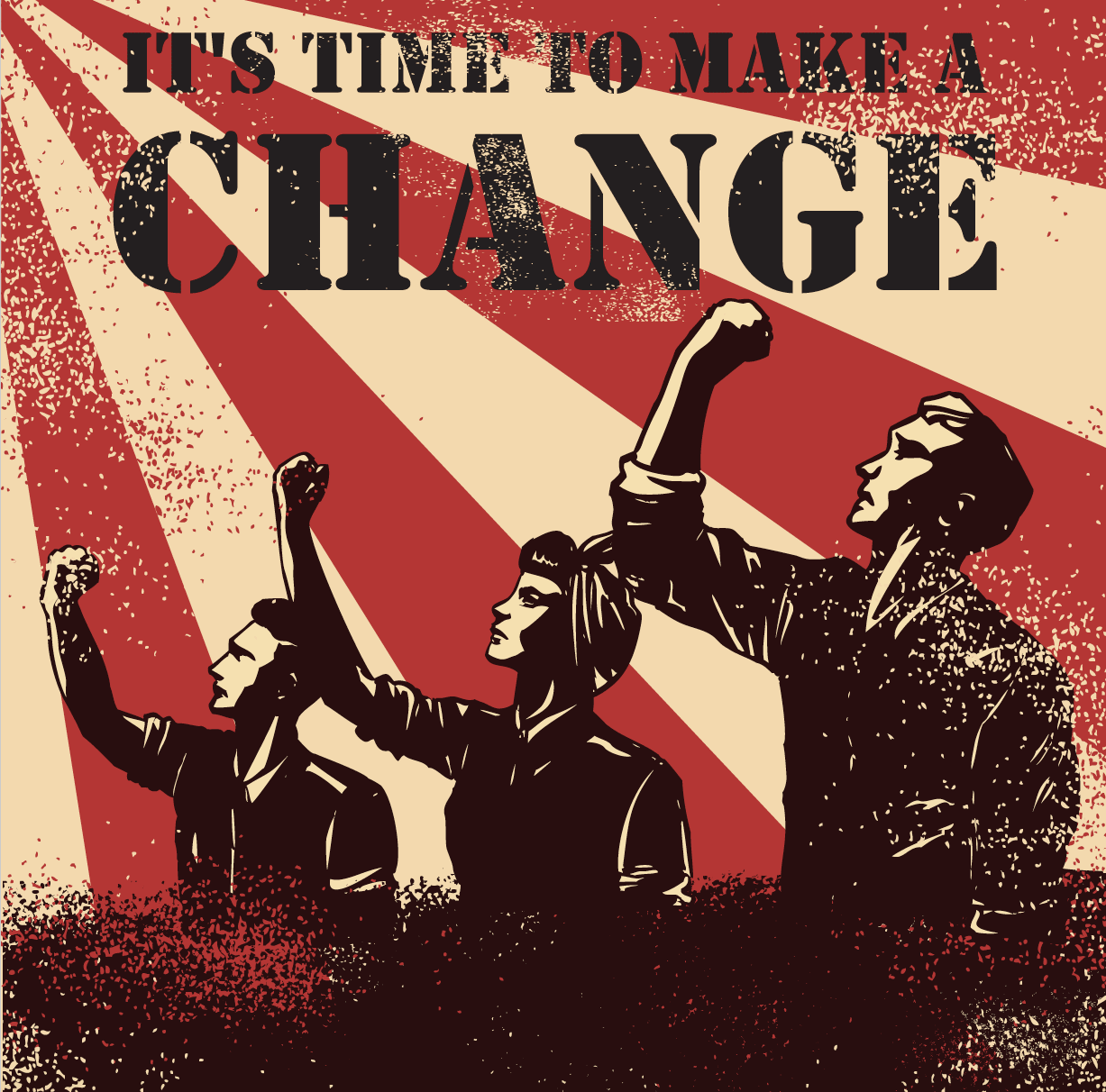 It’s the Fourth of July, and revolution is in the air. Only in America would it look like this: an elite-sponsored Maoist revolt, couched as a Black liberation movement whose canonical texts are a corporate consultant’s white guilt self-help manual, and a New York Times series rewriting history to explain an election they called wrong.

Much of America has watched in quizzical silence in recent weeks as crowds declared war on an increasingly incoherent succession of historical symbols. Maybe you nodded as Confederate general Albert Pike was toppled or even when Christopher Columbus was beheaded, but it got a little weird when George Washington was emblazoned with “Fuck Cops” and set on fire, or when they went after Ulysses S. Grant, abolitionist Colonel Hans Christian Heg, “Forward,” (a seven-foot-tall female figure meant to symbolize progress), the Portland, Oregon “Elk statue,” or my personal favorite, the former slave Miguel de Cervantes, whose cheerful creations Don Quixote and Sancho Panza were apparently mistaken for reals and had their eyes lashed red in San Francisco.

Was a What the Fuck? too much to ask? It was! In the space of a few weeks the level of discourse in the news media dropped so low, the fear of being shamed as a deviationist so high, that most of the weirder incidents went uncovered. Leading press organs engaged in real-time Soviet-style airbrushing. Here’s how the Washington Post described a movement that targeted Spanish missionary Junipero Serra, Abraham Lincoln (a “single-handed symbol of white supremacy,” according to UW-Madison students), an apple cider press sculpture, abolitionist Mathias Baldwin, and the first all-Black volunteer regiment in the Civil War, among others:

Across the country, protesters have toppled statues of figures from America’s sordid past — including Confederate generals — as part of demonstrations against racism and police violence.

The New York Times, once the dictionary definition of “unprovocative,” suddenly reads like Pol Pot’s Sayings of Angkar. Heading into the Fourth of July weekend, the morning read for upscale white Manhattanites was denouncing Mount Rushmore, urging Black America to arm itself, and re-positioning America alongside more deserving historical parallels in a feature about caste systems:

Throughout human history, three caste systems have stood out. The lingering, millenniums-long caste system of India. The tragically accelerated, chilling and officially vanquished caste system of Nazi Germany. And the shape-shifting, unspoken, race-based caste pyramid in the United States.

It’s tragic that this even needs saying, but the sudden reinvention in the press of modern America as a Nazi apartheid state is as phony as the thousands of patriotic campaigns that occupied the news media previously. We’re witnessing an obscene malfunction of the elite messaging system.

The people who run this country have run out of workable myths with which to distract the public, and in a moment of extreme crisis have chosen to stoke civil war and defame the rest of us – black and white – rather than admit to a generation of corruption, betrayal, and mismanagement.

I saw the first hints of this crackup in the panicked conversations of campaign reporters four summers ago. Colleagues in news media had always reveled in the power to police the boundaries of national politics. Former ABC reporter Mark Halperin* (henceforth canceled people will be marked here with asterisks, for shorthand purposes) used to cheerfully refer to a handful of pollsters, pundits, and pols he called the “Gang of 500. who “set the political agenda for the country.”

People like Halperin wrote glowing self-referential “exposes” every four years about the power of their bullshit. If they told Americans a presidential race would be decided by angsty “soccer moms” (because Bill Clinton was talking up “zero tolerance” for school truancy and a return to school uniforms), then it was so. If eight years later the deciders were “security moms,” because what mattered then was not schools or prescription drugs but “what are you doing to protect my kids from terrorists?”, then that was so.

If they said voters cared most of all to know which multimillionaire candidate was a better potential beer-drinking companion – because “a person is smart, people are dumb,” as one pundit put it – then that was to be taken seriously also.

Unfortunately, voters had other problems. By 2016 Americans had lived for a generation under an economic model dominated by huge transnational companies that sold weapons into holocausts of urban violence, rejoiced in addiction to opiates or carcinogens as a revenue model, bled virtually all the savings of the American middle class (targeting minorities especially) through a succession of speculative bubble schemes, and relentlessly lobbied to be exempted from taxes, environmental laws, criminal penalties, and even their own business errors, through bailouts approved by the “politicians” they sponsored in both parties.

The concessions to civilization employers had once under great pressure agreed to provide – pensions, medical insurance, sick leave, the forty-hour work week – vanished as the manufacturing economy was exported in a snap to unfree labor zones like China and Indonesia. Both parties supported the deals American business made with monster states. Just this week U.S. customs seized 13 tons of human hair farmed from the heads of Uighur political prisoners in Chinese labor camps: we gave that country Most Favored Nation Trading status eons ago.

I watched for election cycle after election cycle as politicians and press lackeys alike promised lives would improve with middle-class tax cuts, “service for college” grants, federal retraining programs and an endless succession of proposals to “cut red tape” and “run America like a business.”

Through the election of Barack Obama maybe there was patience for this, but within a few years after the crash of 2008 people stopped believing. When protest movements popped up on both the left and right – ordinary people mad about everything from crushing consumer and student debt to unpunished financial fraud to pointless war to surveillance to bailouts to stolen pensions to, yes, police brutality – the first reaction of donor-fattened pols was to blow off the warning signs. They controlled both parties, what was the worst that could happen?

When the election of Trump made a solid first attempt at answering that question, establishment figures howled in self-pity and outrage. Who but deplorable racists could hate us this much? Those were the first gusts hinting at the current hurricane of stupidity.

About those “deplorables”: the populist fury that drove the Trump campaign was obviously not rooted in concern over police brutality, and just as obviously Trump was using gross racial rhetoric to drum up support. I wrote about this repeatedly covering him in 2015-2016.

But he did stress other themes. In hunger to suck up discontent of every stripe, candidate Trump complained about everything from the anti-trust exemption for insurance companies (“the lines” around states prevented competition, he said half-coherently) to the “obsolete” mission of NATO, to “nation building” abroad (he pledged instead to “build the roads, highways, bridges, tunnels, airports, and the railways of tomorrow” at home), to NAFTA to the Fed to, yes, Most Favored Nation trading status for China.

In Trump crowds one frequently heard people talking about being willing to “try anything” as long as it didn’t come from a “politician,” a term which by 2016 had become synonymous with “paid liar.” Of course Trump was a liar, too, but at least he was his own liar, which in a testament to the level of pessimism gripping the country by 2016 was an important distinction to some.

Trump proved almost completely insincere with respect to all of these policy complaints. But it was amazing to watch the speed with which it became consensus that Trump’s entire platform had been only a promise to restore the power of white identity. It became taboo even to say something as tame as, “Trump sold fake solutions to real problems.” Even that was too near the truth.

Papers like the New York Times did post-mortems citing research that concluded things like “how trade affected personal finances had little bearing on political preferences,” while “unemployment or the density of manufacturing jobs in one’s area” were similarly irrelevant. The same pundits who chanted “It’s the economy, stupid,” throughout the nineties reversed tune.

The best explanation for these sudden reversals in rhetoric is that Trump broke the brains of America’s educated classes. Like Russian aristocrats who spent the last days of the Tsarist empire flocking to fortune-tellers and mystics, upscale blue-staters have lost themselves lately in quasi-religious tracts like White Fragility, and are lining up to flog themselves for personal and historical sins.

In desperation to help the country atone for their idea of why Trump happened, they’ve engaged in a sort of moon landing of anti-intellectual endeavors, committing a generation of minds to finding a solution to the one thing no thinking person ever considered a problem, i.e. the Enlightenment ideas that led to the American Revolution.

The same pols and pundits who not long ago were waving the flag for wars and insisting that American-style democracy was so perfectly realized that it made sense to bring it to all the peoples of the world, by force if needed (think Friedman’s hypothesis of a borderless utopia of forced wealth creation called the Golden Straitjacket), have now reversed course to tell us our entire history needs to be wiped clean.

Everything is a lie now. CNN even put “Independence” in quotes when describing the holiday today (i.e. “Reexamining ‘Independence’ Day”). This will end with Wolf Blitzer, dressed in a daskiki, pulling the switch to dynamite the Statue of Liberty.