In its authorization memo dated Thursday, the FCC said, “We agree with SpaceX and Kepler that the public interest would benefit by granting with conditions their applications. Authorizing a new class of terminals for SpaceX’s satellite system will expand the range of broadband capabilities to meet the growing user demands that now require connectivity while on the move, whether driving an RV across the country, moving a freighter from Europe to a U.S. port, or while on a domestic or international flight.”

This permission is crucial for SpaceX to expand its high-speed satellite internet service on commercial airline carriers. It has signed deals with Hawaiian Airlines and semiprivate charter provider JSX.

Last month, Royal Caribbean Group requested the FCC to immediately clear the way for next-generation high-speed internet on cruise ships. Just like airlines, cruise ship internet speeds while sailing range between 3-5 Mbps for download, very similar to speeds to ones in commercial jets. For reference, the average US household has a download speed of about 43 Mbps.

The age of remote working and the internet of everything is pushing a need for high-speed satellite internet.

The FCC’s authorization also allows semi-trucks, RVs, and anything that moves, even a Tesla, to use Starlink for portable use.

However, there is a condition the FCC noted for in-motion Starlink service. SpaceX must “accept any interference received from current and future services authorized.” 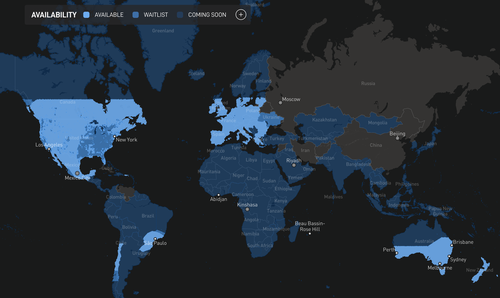 Speedtest.net clocked Starlink’s average internet speed in the US at around 90.55 Mbps in 1Q22, up 38% from 65.72 Mbps YoY. Imagine receiving those speeds on a commercial jet and/or cruise ship — would change the game of remote working.