Science For Madmen & The Great Reset

One of the absurdities of the coronavirus era is the purported faith in science by the political class; in particular, the left. 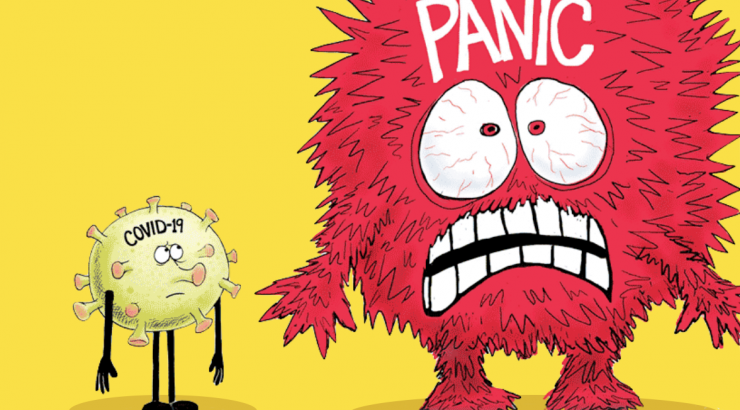 Joe Biden, for instance, said he would shut the country down if recommended by scientists.  Nancy Pelosi, this week, with respect to coronavirus stimulus, told Wolf Blitzer, that “…the science should call the shot and when they do, we should all trust it.”

President Trump, taking the advice of Reagan, recently verified the effects of coronavirus himself.  His findings, following a three day bout with the illness, revealed the science based policies that have been applied are not to be trusted.  Trump tweeted these conclusions:

“One thing that’s for certain: Don’t let it dominate you.  Don’t be afraid of it.  You’re going to beat it.”

According to Science magazine,

“[Trump’s] repeated public dismissals of scientific expertise, and his disdain for evidence have prompted many researchers to label him the most antiscience president in living memory.”

Maybe so.  But when science is being used by policy makers to do stupid and destructive things, like locking down the economy, being antiscience is the intelligent choice.  What’s more, the World Health Organization now says it’s opposed to lockdowns, and told world leaders: “stop using lockdowns as your primary control method.”

We have a hunch that the science of lockdowns has little to do with stemming the spread of coronavirus.  We’ll have more on this in a moment.  But first, we must make an important distinction.  And to do so, we must take a brief diversion…

Private and public life are as different as chalk and cheese.  They are both disposed to acts of madmen.  Sometimes these madmen apply science.  But in private life science is used with honest intentions; at the very least, with the aim of making a buck.  In public life, applications of science are far more sinister.

Here we turn to our own hamlet – the Los Angeles Basin – with purpose and intent.  We take a gander back at its heyday for private madmen.  We’re after perspective and the clarity it brings to today’s public madness.  Where to begin?

By the early 20th century, before the mania to splatter every square foot of the LA Basin’s surface with concrete took hold of the local spirits, the place was already a magnet for eccentrics, delusionals, and hucksters galore.  Howard Hughes, a total lunatic, would dream up his latest flying machine and then crash it into Beverly Hills.

There was Italian immigrant Simon Rodia.  For reasons unknown, and between swigs of malt liquor, he worked nearly every day from 1921 to 1955 chicken wiring steel pipes and rods together, erecting numerous towering eyesores in his backyard in the Watts district of Los Angeles.

Then, after 34 years of this madness, Rodia, on a whim, deeded the property to his neighbor and hopped a bus to the East Bay.  No one in Watts ever heard from him again.  But his monstrosities, known as the Watts Towers, are now a National Historic Landmark.  Go figure?

There was also Griffith J. Griffith, who amassed a fortune in the mining industry.  That was before he shot his wife in a Santa Monica Hotel.  To make good for his transgressions – and to commute his time in San Quentin to just two years – Griffith donated the land for Griffith Park to Los Angeles and funded the City’s observatory.  Without Griffith’s private act of preservation the City wouldn’t have any remaining land that’s not covered with concrete.

These were the sorts of wacky and wild characters that roamed about when state and local governments were small and feeble.  It was the beginning of a long property boom…where, for the next 50-years, property values went up without interruption.

Even the most harebrained business ventures were almost guaranteed to succeed.  For example, you could buy an old mail service boat – like John Clearman did – tow it from the Long Beach Harbor up to a wide open corner lot on Huntington Drive in the San Gabriel Valley, plop it down, and get rich selling cheese toast and red cabbage salad out of it.

This was before zoning codes and city permits spoiled all the fun.  Was the world a better place?  We don’t know; we weren’t there to experience it.  From what we can tell, it was certainly freer.  But, alas, the great perversion of science had only just begun.

These days private eccentricity has been eliminated like the carburetor.  In its place, public madness, guided by science, now rules the land.  Public policy, no matter how destructive, is forced upon the populous, so long as a scientific expert says so.

If you recall, when the Federal Reserve Act was signed into law by Woody Wilson two days before Christmas in 1913, it was said to provide scientific management of the economy.  In truth, it instituted the age old practice of money debasement, and intervention into private life, as a matter of public policy.

Klaus Schwab, a madman, and founder of the World Economic Forum (WEF) is a man of science based public policy.  Nearly a decade ago, at the annual WEF gathering in Davos, Switzerland, Schwab, bore the sins of all capitalists.  At the time, we documented the Saturday night barn stomp turn Sunday morning salvation call with the article, Davos Hootenanny and Salvation Call.

Schwab, having gained full salvation, has continued to use science to promote ever greater – globalist – control over people’s lives.  The coronavirus has provided a convenient cover to further his agenda.  Schwab calls it The Great Reset:

“The pandemic represents a rare but narrow window of opportunity to reflect, reimagine, and reset our world.”

Schwab’s vision for what he calls ‘The Post Pandemic Era,’ is a world where global planners cooperate between nations to provide greater societal equality and sustainable – nature-positive – development.  Somehow dissolving existing political institutions that were developed over hundreds of years of practice in favor of global governance is supposed to reset the world for the better.  So long as Schwab reimagines it correctly.

In his new book, “COVID-19: The Great Reset,” Schwab and his co-author admit that COVID-19 is “one of the least deadly pandemics in the last 2000 years.”

This brings us to the crux of the matter.  Lockdowns have little to do with stemming the spread of coronavirus.  They are about greater government control by madmen.  The purported science behind the lockdowns is science for madmen.

Don’t trust it.  Don’t trust the politicians.  They destroyed the economy to rule your life.  Alas, they’ve only just begun.