Rabo: “What Was Behind Yesterdays Violent Swings In The Market”

Submitted by Michael Every of Rabobank

Joining the dots (and dashes)

Yesterday saw swings in the markets, some key stocks in the US in particular, and equal swings in our underlying backdrop. Let’s try and join them into a coherent whole.

From the dots side we need to start with the plotters at the Fed. Dallas Fed President Kaplan spoke yesterday – and made a classic error, noting Fed emergency lending facilities “won’t be left in place indefinitely” and that “he is a believer that we will need to get bac to more unaided market function without as much intervention from the Fed. We’re just not at that point yet.” The key point/dot here is that our Robin Hood-y/Barstool-y markets clearly do not want to conceive of EVER going back to “unaided function”. They are predicated on a quite logical assumption that any reduction in central bank liquidity will result in a crash, which will result in the resumption of said liquidity. More money, please. And don’t think about taking it away.

From the dashes side, the US moved beyond not taking a formal stance on maritime disputes while insisting on freedom of navigation to openly calling some Chinese claims in the South China Sea illegal. In short, the Chinese 9-dash line showing the South China Sea as its own is rejected. Does one need to join many dots or dashes to see where such conflicting claims can lead? Not towards any kind of return to the US-China economic status quo ante at least.

Yes, and crucially, Bloomberg reports the US will not be specifically targeting the HKD peg over Beijing’s actions on Hong Kong by limiting access to USD because “it would be difficult to implement and might end up hurting the US”. It seems the ‘because markets’ side of the Trump administration has the upper hand over the geostrategic hawks here; naturally this is also the case with the de minimis EU response given in foreign policy dey are de mini-me and only understand markets – Germany’s foreign ministry just removed the Taiwanese flag from its website, for example.

This is a positive because such a US policy to be able to turn off the taps the same way the Fed can turn them on (and on and on) remains the financial equivalent of war as potent as the two US carrier strike groups now in the region. Yet there does not seem to be much dot and dash joining from the US side: how does it confront China over the South China Sea and Hong Kong, which is says it wants to, if ‘because markets’ is the White House rule?

Decoupling, perhaps. As Reuters reports the “The Trump administration plans to soon scrap a 2013 agreement between US and Chinese auditing authorities…a move that could foreshadow a broader crackdown on US-listed Chinese firms under fire for sidestepping American disclosure rules.” So new Chinese listings in the US, it would seem. At least that’s more business for Hong Kong – but then why leave the peg alone and let the US lose out without effecting any real change? Again, the dots and dashes don’t join up.

Indeed, the risks of stronger US actions are arguably still there. Sanctions over Hong Kong still loom and would end up having the same negative effect on HKD, and CNY, if applied as in Iran (whom China is signing a 25-year geostrategic cooperation agreement with.) Moreover, the UK has stated they expect 200,000 Hong Kongers to arrive over the next four years. That’s far less than 10% of those allowed to come, but still points to a huge drain of capital/FX reserves if each migrant arrives with savings; more so if US, Australia and Canada see a similar number.

In which case, it’s a good job Chinese exports were up 0.5% y/y in June (vs. -2.0% consensus) and even imports were up 2.7% (vs. -9.0% consensus). But can we really expect this export trend to continue in H2 with lockdowns coming back and the back of the US increasingly up? Even Europe is miffed, given if there is one thing mercantilists don’t like, it’s mercantilism.

On which front, current presidential favourite Joe Biden is today going to launch a plan to spend USD2 trillion over his first term in office to get to 100% clean electricity by 2024. That’s a large stimulus that would have been called insane six months ago. Now it’s moderate. He’s also talking about a global apology tour to stress that America First is over – and about making things in America with state spending – so that new USD2 trillion in liquidity, under-written by the Fed if you join the dots, is going to stay in the US and not flow to major exporters like China and Japan and the EU (so please don’t join those dots – or any US dots to Chinese dashes).

Could someone help Joe join the dots too? Either the apology tour won’t be very apologetic, or new US liquidity will lift boats other than American, or the US is going to continue America First anyway as it reflates. (Of course, to really close itself off it would need to impose capital controls on inflows….which are not going to happen ‘because markets’. )

Meanwhile, as a harbinger of how bad our Q2 is going to look when we get the data, Singapore’s GDP collapsed -42.1% q/q annualised. 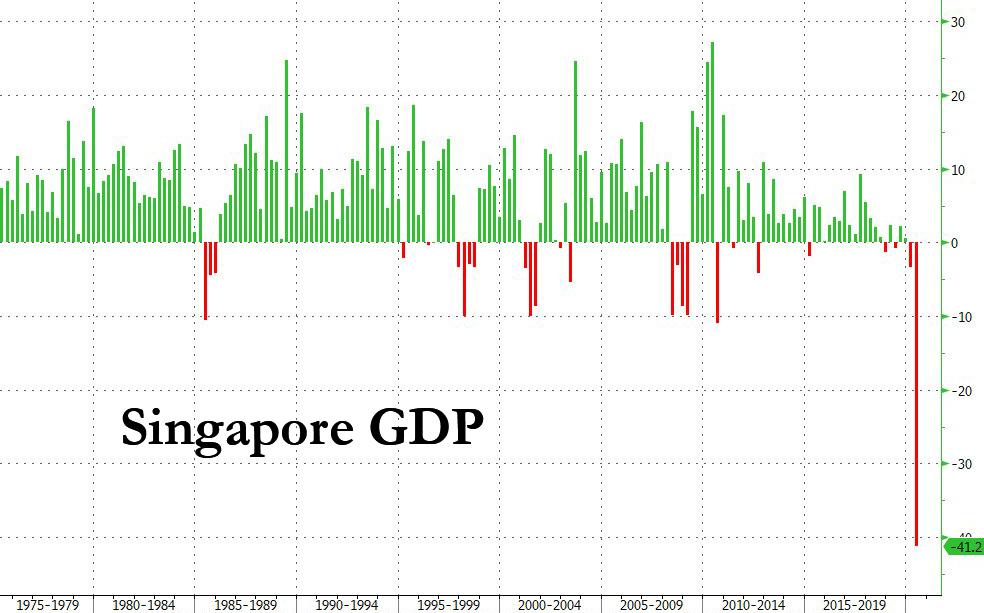 This time last year one would have been brave to say even -4.2%. How the world changes. Indeed, with reports that: Covid-19 now infects more than 13 million people; natural immunity after catching it only lasts a few months; the latest Hong Kong outbreak variant is 30% more infectious than the previous wave; a large percentage of those who survive even moderate cases apparently end up with permanent heart damage; and as articles dribble out asking what the world looks like if we don’t get a vaccine at all, it’s perhaps time to join a few more dots and say ‘Dash it’.