Update (2020ET): As details emerged that the state and local aid embedded in Treasury Secretary Mnuchin’s latest $916 COVID Relief bill offer was around $100 billion of school-reopening-targeted funds (and not free money to bail out the pension funds), it will come as no shock to anyone that Democrats rejected the bill.

Pelosi and Schumer did accept that McConnell signing off on Mnuchin’s deal was “progress,” they said the proposal’s unemployment insurance position is “unacceptable.”

Proposal “must not be allowed to obstruct the bipartisan Congressional talks that are underway.”

“The President’s proposal starts by cutting the unemployment insurance proposal being discussed by bipartisan Members of the House and Senate from $180 billion to $40 billion. That is unacceptable.”

Update (1745ET): While Mitch McConnell reportedly suggested he would be willing to trade liability for state and local bailouts, a statement from Treasury Secretary Mnuchin adds yet more confusion to the situation over COVID Relief. The bill is slightly larger than the $908 billion bipartisan bill that has been floated: 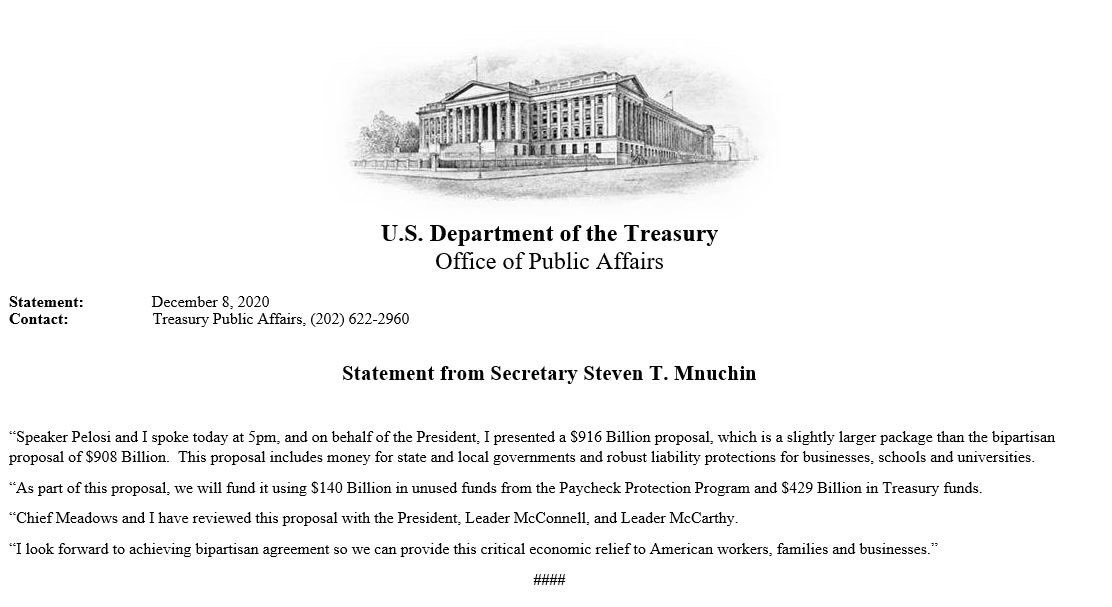 So, that means $569 billion is in ‘recycled’ funds and this bill includes a state and local bailout (what Dems want) and liability protection (which GOP wants).

Update (1300ET): Senate Majority Leader Mitch McConnell has made a move from his more stoic position, making it clear that he is willing to pass a COVID relief bill without the liability protection clause that the GOP has been pushing for for months, if Democrats are willing to remove their state and local bailout funding demands.

As far as he is concerned, these are the two things holding up relief to millions of Americans.

Hopes of a bipartisan stimulus deal faded on Tuesday after failing to resolve several remaining stumbling blocks left over from Monday – including Senate Majority Leader Mitch McConnell’s refusal to endorse a $908 billion bipartisan proposal as a basis for talks. 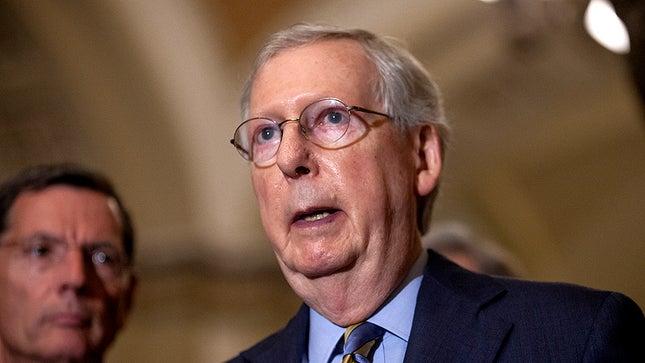 McConnell has also insisted on applying broad federal limits on COVID-19 related lawsuits against businesses – for which Democrats are offering a six-month moratorium.

“Drop the all-or nothing tactics,” McConnell said of Democrats during a Monday Senate floor speech in which he called on Senate Minority Leader Chuck Schumer to allow a vote on a targeted bill which would provide extended unemployment insurance, along with small business assistance and funding for vaccine distribution.

Senators from both sides of the aisle concluded that the prospects for a $908 billion compromise that Republican and Democratic negotiators are hashing out will come down to McConnell’s decision. Several GOP members have endorsed or been open to the plan, and top White House economic adviser Larry Kudlow said President Donald Trump would likely sign it. McConnell is engaging the negotiators even though he hasn’t budged. –Fortune

In addition to gridlock over liability protection for businesses, Republicans and Democrats are butting heads over aid for states and localities – which has been House Speaker Nancy Pelosi’s line in the sand for months.

“Those are coupled together,” said Texas Republican Senator, John Cornyn, referring to the liability protection and funding for states and municipalities. “There’s either going to be none for both of those, or both of those that are going to be provided for. My hope is we’ll do both.”

Republicans claim that state assistance is a scheme to bail out poorly-run Democratic areas, while Democrats have refused to shield employers from lawsuits for failing to protect employees who contract COVID-19.

Meanwhile, lawmakers are in even deeper gridlock on the omnibus spending bill – which includes disputes over further border wall funding, money for police anti-racism training (!?) and other measures.

Speaking about the Covid-19 relief proposal, McConnell said it’s getting “down to the wire.“

Schumer blamed his GOP counterpart for stalling the compromise effort. He and Pelosi publicly endorsed the $908 billion plan last Wednesday, after having made a new pitch to McConnell two days before. They previously sought a $2.4 trillion bill.

“We want the leader to sit down and negotiate so we can come up with a bipartisan proposal that can pass the House and the Senate,” Schumer said on the Senate floor. He highlighted that some economists are warning of a double-dip recession if Congress fails to pass a deal. –Fortune

On Tuesday, GOP leaders plan to discuss the situation with Treasury Secretary Steven Mnuchin and White House Chief of Staff Mark Meadows. In particular, they will seek a separate COVID-19 relief initiative.