Authored by Joakim Book via The American Institute for Economic Research,

This year has been stupefying – only God knows what comes next! What has been so odd in the corona conversation is the persistent lack of nuance. Many have treated the responses to the pandemic with a one-dimensional argument that won’t pass even a rudimentary sniff test. The story goes something like this: The moral imperative of the day is to close down society because that will reduce social interaction, transmission, and deaths. 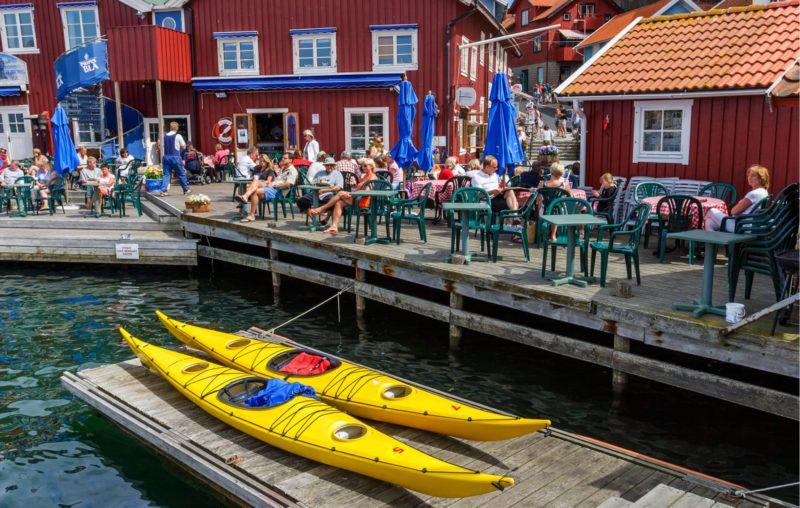 And suddenly that most darling of countries, Sweden, is deviant and miscreant. Its lighter-touch approach is discussed as “the World’s Cautionary Tale,” a “A Very Swedish Sort of Failure,” and “The Grim Truth about the Swedish ‘Model’.”

Allowing restaurants and schools and hairdressers to remain open in the midst of a contagious pandemic has attracted fierce international opposition. For keeping its society more open than most everyone else, Sweden has paid a hefty price, we are told: almost 6,000 dead in a population of just above 10 million. Had Sweden invoked the strict lockdowns of its Nordic neighbors, so many unnecessary deaths could have been prevented. The usually vaunted Scandinavian country sacrificed its elderly with nothing but kindergartens and some open-air cafés to show for it. An article in Business Insider is titled “Skeptical Experts in Sweden Say Its Decision to Have No Lockdown Is a Terrible Mistake that No Other Nation Should Copy.”

But is the story true?

In a new paper, we consider 15 other factors that help to explain Sweden’s excessive death rate compared to its Nordic neighbors. Sweden was in a very different position than its neighboring countries at the onset of the pandemic – uniquely positioned, if you wish, to suffer a worse outcome from a coronavirus-like pandemic.

Many observers argue along the lines of the Latin expression post hoc ergo propter hoc, usually translated as “after this, thus because of this.” The idea is that because Sweden’s horrific death rates followed its refusal to lock down its society as strictly as other countries, the latter must have been the cause of the former.

We invoke another Latin expression as more pertinent to Sweden’s excess corona deaths: ceteris paribus, or “all things equal.” Many international observers, particularly Americans, might make the mistake of thinking that all the Nordic countries are the same – Minnesota-sized countries with roughly the same language and culture and social-democratic institutions.

Not so. Sweden differs in identifiable ways from Norway, Finland, and Denmark. Moreover, the pandemic is particular, and the particulars of time and place can matter enormously.

Other densely populated regions of Sweden, such as the borderlands to Denmark, have seen death rates indistinguishable from Danish regions across Öresund, suggesting to us that there’s something special about Stockholm’s outbreak that doesn’t reflect the Swedish policies more broadly. One is the relatively larger population and metro commuter area. As we’ve seen with New York City and the tri-state area, contagion increases rapidly with more people in closer vicinities. The Stockholm subway system has between three and five times the ridership that its Nordic neighbors do.

Another is the propensity of Stockholm residents to ski in the Alps. Also notable for Stockholm is the timing of Sweden’s “sport” break (sportlov), where families often go to Italy or Austria for skiing. The sport breaks are staggered for Sweden’s three largest metropolitan areas: Gothenburg, February 10-16; Malmö, February 17-23; Stockholm, February 24-March 1. Stockholm’s winter break corresponds with the booming infections in northern Italy, whereas travelers from the other two areas seem to have largely missed those. Karin Tegmark Wisell of Sweden’s Public Health Agency reported that when investigating the virus, they could “clearly see the enormous imports from Italy.” As the population in the three other Nordics don’t travel to the Alps as much, they would not have had as much early exposure through this infection channel.

By using the timing of lockdowns, we discuss a more devastating argument against the belief that they would have helped Sweden much. The other Nordics rapidly closed their borders and societies around March 12, which is the date when a counterfactual Sweden could have followed its Nordic peers and done the same. According to the World Health Organization, it takes something like 12 days from first corona symptoms to death –add another few days from exposure to first symptoms. We simply calculate 18 days from March 12 (the red bar in the figure below) and suggest that spread and infections before then could not have been prevented by a lockdown: 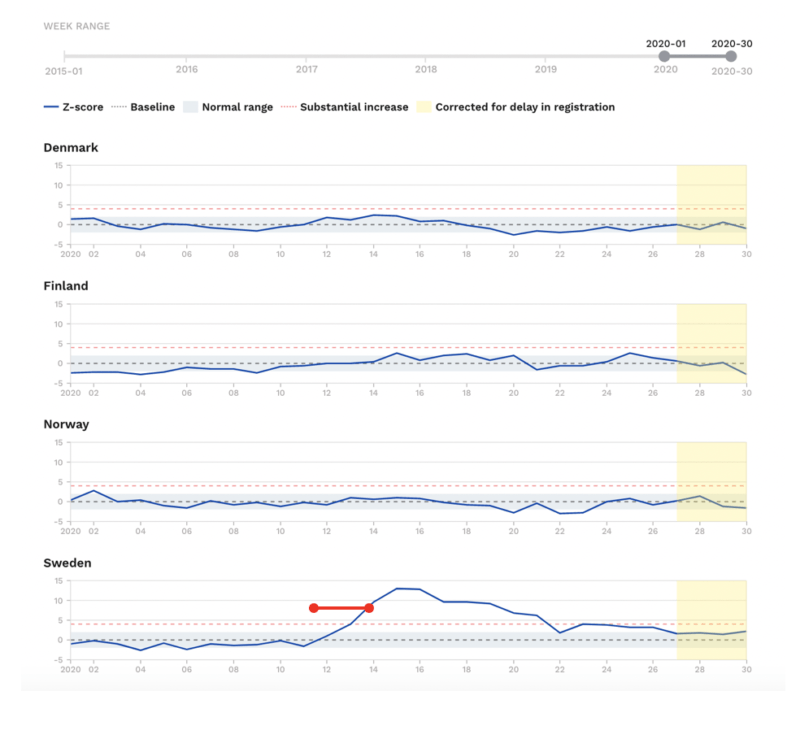 The figure above is all-cause deaths. We see the same thing if we look only at the COVID deaths:

The horizontal red line spans deaths that were baked into the cake by March 12. Much of the statistical hill that Sweden was to climb had already been infected by March 12. On this date, the virus was already much more pervasive in Sweden than in the other Nordics: Actions taken on March 12 could not have undone the past, only altered the future.

In the paper, we also discuss the impact of immigrant populations, not only that infected non-Western immigrants are about 50% more likely than those of European descent to die from the virus, but that Sweden has a much larger population of citizens born in Africa or Asia – 9.8%, compared to Denmark’s 5 percent, Norway’s 7 percent, and Finland’s 3 percent. If that’s a higher risk factor, Sweden was worse positioned.

Also, elderly care workers are heavily staffed by immigrants. Like elsewhere, most of Sweden’s deaths have occurred in elderly care services, of which Sweden has more and larger facilities, with more vulnerable residents than does its neighbors. Also, we believe that cross-work among several care home facilities is more common in Sweden than in the other Nordics, offering another channel for transmitting the disease to those most vulnerable.

But the single largest factor for why Sweden had it much worse than its Nordic neighbors during corona is the “dry tinder” hypothesis.

We are sensitive about borrowing the “dry tinder” metaphor for the persons of human souls, but the metaphor is clarifying: Maybe a country has more forest fires this year than its neighbors because it had fewer fires in previous years, and dry tinder accumulated, awaiting a spark.

For the previous year’s flu season, Sweden saw remarkably low death rates, relative to its own recent history and to that of its neighbors. Jonas Herby, of Denmark’s Centre for Political Studies, shows Sweden’s dry tinder situation by reporting mortality rates over the last five flu seasons: 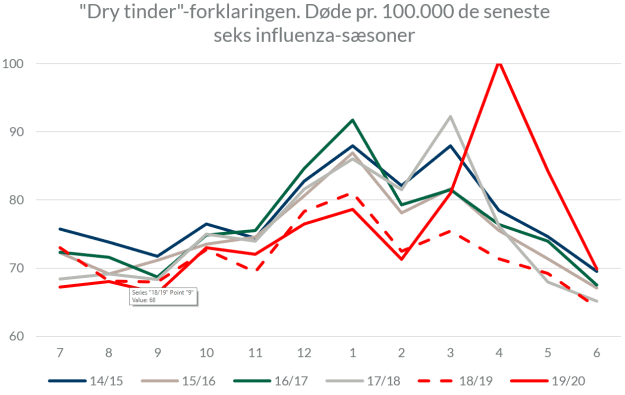 The dry-tinder situation in Sweden

The dotted red line shows the unusually light death toll during the year 2018/2019 and into the first weeks of 2020; Sweden was loaded with “dry tinder” when the coronavirus arrived.

A Twitter user (EffectsFacts) used the Human Mortality Database by demographers from Max Planck Institute and U.C. Berkeley to present the data in a number of ways. The following figure has a panel for each of the four countries. The critical thing in each panel is the 2018/2019 flu season peak straddled by two valleys. Look at the peak area compared to the two valley areas. It is graphically evident that Sweden’s ratio of peak-area/two-valleys-area is by far the lowest. It had fewer forest fires in previous years. The result was much more dry tinder heading into 2020. (The medical device engineer Ivor Cummins provides a splendid 2-min pedagogical video to illustrate those numbers). 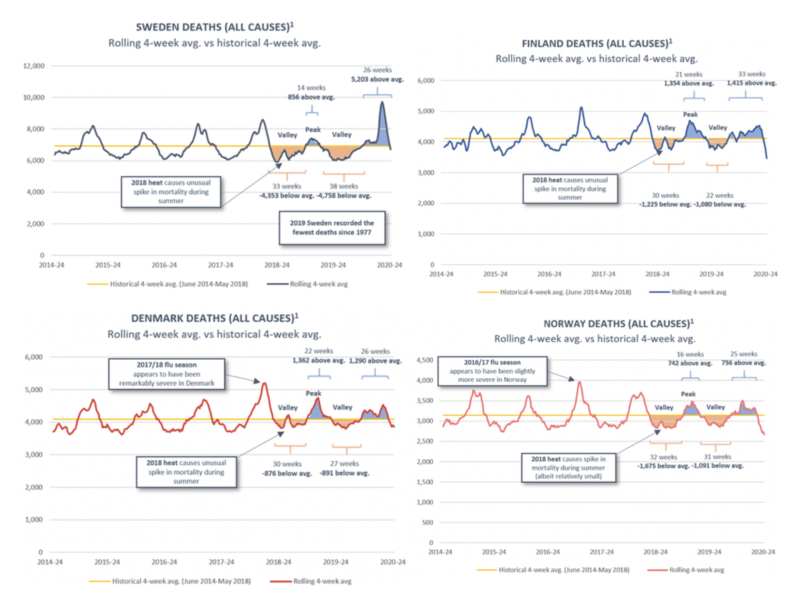 Sweden had a much lower peak/valleys ratio.

Going into the corona pandemic of 2020, Sweden already had an abundance of vulnerable elderly who would not have survived a harsher flu season – and whose Danish, Norwegian and Finnish counterparts did not survive the previous years’ flu seasons in those countries.

In our paper, we present and link to numerous other analyses of the “dry tinder” effect in Sweden. It is real, and it is very large. We provide some simple calculations to suggest that it might account for half of Sweden’s outsized COVID death toll.

Why is it that during previous years 2018-2019 Sweden did so much better – or perhaps was luckier – than the other Nordics in preventing deaths? We do not know. At any rate, “dry tinder” is why “Sweden Records Highest Death Tally in 150 Years in First Half of 2020” – and is something that any real journalist writing on August 19, 2020 would have learned of and informed readers of. That article in The Guardian epitomizes the lack of nuance marking the leftist media.

Delivering the verdict on Sweden’s response to the corona pandemic must take this into account: going into 2020, Sweden was already in a more vulnerable position than its neighbors.

Even if one disregards new research suggesting that lockdowns don’t work (here, here and here), it is improbable that Sweden’s light lockdown is one of the main possible reasons for Sweden’s high COVID death rate. But we go on to list 15 other factors. The single-minded story that Sweden’s high death rate, relative to the other Nordics, stems from its relatively liberal corona policy lacks nuance. There are many other differences between Sweden, Norway, Denmark, and Finland, including differences specific to the present. Compared to its neighbors, Sweden would have had a much worse death toll regardless of the policy measures it took in March 2020.