We recently discussed how an American University professor called for the impeachment of President Donald Trump over his handling of the coronavirus outbreak.

Not to be outdone, MSNBC legal analyst Glenn Kirschner is now declaring that Trump should be charged with negligent homicide over his conduct. While insisting that, as a former prosecutor, this is something he “actually know[s] too much about,” Kirschner proceeds to utterly misrepresent the controlling law and definitions of such a criminal case.

While I come from the other perspective of a criminal defense attorney, the argument being put forward by the MSNBC legal analyst is devoid of any basis in the law. 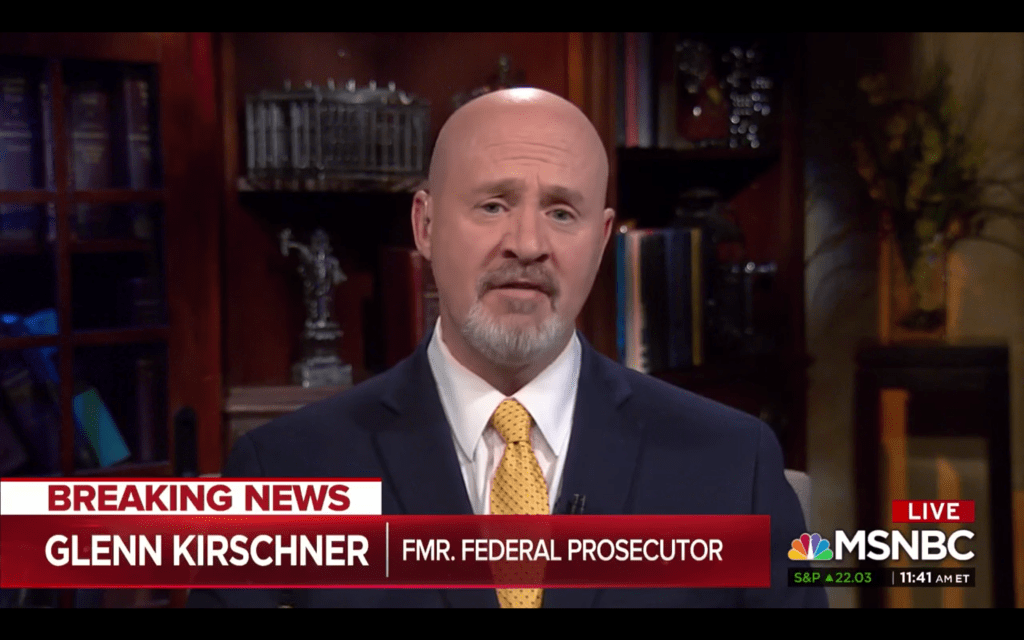 It does however play well for those who believe impeachment or prosecution are entirely fluid and relative concepts when it comes to Trump.

Kirchner has proven a reassuring legal analyst for MSNBC viewers in predicting Trump’s demise or, a year ago, predicting that Trump’s emergency order would quickly go down in flames. (Trump has largely if not entirely prevailed as some of us predicted).

Now, however, Kirschner is telling viewers that Trump can be charged with negligent homicide in a series of tweets:

“Hey All. Can we talk about 1 of the few topics I may actually know too much about: homicide? Specifically, whether Donald Trump may have criminal exposure for some level of negligent homicide or voluntary/involuntary manslaughter for the way he’s mishandled the Coronavirus crisis.”

He explained that his experience as a prosecutor gives him this confidence of a credible charge:

“I spent 22 of my 30 years as a federal prosecutor handling murder cases in Washington, DC. I served as Chief of the Homicide Section at the DC US Attorney’s Office, overseeing all murder prosecutions in the city. I was always on the lookout for novel ways to apply homicide…

I was always on the lookout for novel ways to apply homicide liability in an attempt to appropriately and ethically hold accountable those who were responsible for taking the life of a fellow human being. I think it’s fair to observe that there’s nothing more devastating to a family than losing a loved one to ether violent crime or to an illness that could have been prevented or mitigated/ I’m trying to assimilate all available evidence (rapidly developing and being reported every day) to fairly assess whether Trump and his administration may have acted/failed to act in a way that could give rise to homicide liability. This is not an easy question.”

It actually is “an easy question” because Kirschner’s theory is absolutely absurd. Not novel. Nonsense.

The courts have long recognized that discretionary actions by public officials is not the subject of civil, let alone criminal, liability. The Federal Tort Claims Act waives sovereign immunity for negligence with the express exception for discretionary functions. Such functions generally mean under cases like Berkovitz v. United States , 486 U.S. 531 (1988), that public officials are protected in making choices that are based on public policy or priorities. As the Supreme Court reaffirmed in United States v. Gaubert, 499 U.S. 315, 325 (1991). the federal law protects decisions that are based on policy choices and courts will not second guess such choices.

Seeking criminal charges is even more difficult with a higher burden of proof. Bad policies choices are not crimes. The government has killed millions of people through bad choices from lax environmental protections to health care choices to the failure to act upon various crises. Obviously, the federal government is unlikely to bring such a charge criminalizing federal decisionmaking. Moreover state prosecutions on such theories have failed. Take the case of FBI sniper Lon Horiuchi who use part of an elite Hostage Rescue Team were deployed to Ruby Ridge for the infamous standoff with a family involving a weapons charge (and suspicion of involving in the shooting of a deputy marshal). In firing on armed individuals, Horiuchi shot and killed Vicki Weaver who was holding a child. The Justice Department declined prosecution because 18 U.S.C. 242 onlhy covers the “willful” deprivation of federal constitutional or statutory rights by government actors. Horiuchi was wrong in firing the shot but he did not willfully use unreasonable force because he thought he was protecting fellow officers and firing at a fleeing armed felon.

When criminal charges were brought by state officials, they were promptly removed to federal court and then dismissed. The district court and then the federal appellate court ruled that the action was taken within the officer’s scope of authority and that he believed that the act was necessary and proper under the circumstances.

The Horiuchi case involved a far more narrow and concrete set of elements but still failed. To suggest that decisions are criminal made in the a sweeping pandemic (with the advice of a health care task force) is nonsensical.

Yet, Kirschner seems entirely unburdened by the law or controlling precedent in assuring the public that this is a real option. Notably, he again repeats the MSNBC mantra of a litany of crimes by Trump that were notably omitted from any of the articles of impeachment by the Democrats. Those claims were also made with the same degree of confidence despite the fact that they conflicted with controlling precedent:

“Further, whereas the evidence is clear that Trump has committed multiple criminal offenses both before his tenure as president (campaign finance crimes) & during his time as president (obstruction of justice, bribery/extortion) homicide liability by his negligent/grossly negligent (and/or possibly intentional) mishandling of the Coronavirus crisis in the US is a more nuanced and thorny issue and deserves careful consideration. But the homicide liability issue MUST be addressed because ALL criminal charges will have to be investigated and, if the evidence dictates it, prosecuted come Jan. 2021. Stay tuned.”

That is the point of course: to keep people stay tuned. The failure of any of the past breathless criminal theories to actually materialize has not diminished the appetite, if not the need, for additional theories. It is not “nuanced.” It is nonsense. A case cannot be based on such a theory and, if this is an example of how Kirschner continually found “novel ways to apply homicide liability” as a prosecutor, it is a chilling prospect for anyone who values the rule of law.

A “novel” virus is not an invitation for novel criminal theories. If Kirschner is correct, every living president in our lifetime could have been charged with negligent homicide. MSNBC has become a font for such flights of legal fancies. It may be cathartic but comes at a price. It further seeks to bend our legal standards to meet the needs of this age of rage. Rather than inform viewers of the reality of the law, it seeks to fill an insatiable appetite for impeachment and prosecution fantasies. The result is a race to the bottom in legal analysis that is inimical to both the media and the law.