“Let Them Die”: Fairfax PTA & NAACP Officer Calls For The Death Of Those Who Oppose CRT

What was even more unnerving is the applause from other parents to her “let them die” declaration. 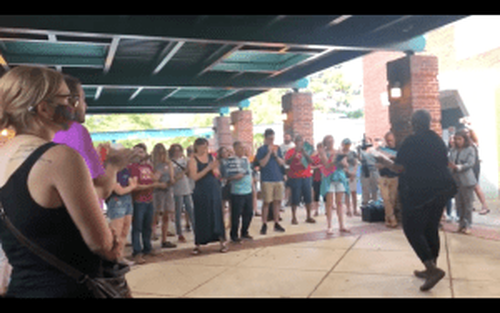 The video was taken by a Fairfax parent, Asra Nomani, whose son recently graduated from Fairfax County Public Schools and helps run the watchdog group Parents Defending Education. The speech was reportedly held at a counter-protest a meeting billed as “STOP CRT RALLY.”

Leete railed against those objecting to the identity-based lesson plans. Notably, Leete fell back on the same shaming that accused parents of hating everything and everyone because they do not want this material to be taught to their children.  Keep in mind that this would encompass the majority of parents according to recent polls.

“Let them die,” says @FairfaxNAACP leader Michelle Leete at protest before @fcpsnews board. Folks against critical race theory are here, with protestors including Leete opposing them. It’ll be 🧨 tonight. Watch at https://t.co/KuScNenTVQ pic.twitter.com/Csb5faEYKG

The unhinged attack on parents opposing these lessons is all-too-familiar in our age of rage. It is not enough to disagree on what is appropriate for our schools, you have to paint the other side as bizarrely opposing the environment, workers, “help people,” inclusion, healthcare, LGBTQ, and of course children.Fairfax has become a major battleground over CRT and race-based programs.  That debate has reached out Thomas Jefferson High Schoo, ranked No. 1 among all public high schools nationwide by U.S. News & World Report.

TJ is a source of pride for the county as an elite school that offers advanced courses for our best students. However, as with other jurisdictions where meritocracy  and standardized testing have been declared racist, school officials have moved to drop actual grades and scores as the critical qualifications for entry in order to increase African American participation.

The race-blind entrance exam was successful in picking the best students in the county and the school serves as a wonderful goal for students who need advanced school work. So the school board went to a “holistic” approach to increase diversity. The primary racial group targeted by the board was Asian students. The result was that this year Asian-Americans admitted to TJ dropped to 54% this year from 73% last year. These students were no longer admitted entirely on their academic achievement on tests and scores. Their race was the motivating factor in changing the entry requirements.

In some ways, Fairfax is still better than many jurisdictions that are eliminating elite schools and advanced courses because of the race of the students in those programs.

It is incredibly sad to see this type of reckless rhetoric in our school district. Many of us came to Fairfax because it has always been viewed as a district that put academic excellence as the highest priority. We have found the schools in McLean to be terrific and the teachers to be incredibly supportive. I hate to see that long-successful approach swamped by the unrestrained rage and divisions of our contemporary politics.