Authored by Tom Ozimek via The Epoch Times,

Former Treasury Secretary Larry Summers, who has repeatedly criticized loose central bank policies and has forcefully sounded the alarm on the upside risks of the current bout of inflation, has warned that global financial markets seem to be pricing in slow growth and low real interest rates for the next several years.

“The stimulus that we’ve enacted is 5 to 10 times—depending on how you do the calculation—as large as the fiscal stimulus enacted after the [2008] financial crisis,” Summers said in a Nov. 10 lecture hosted by the London School of Economics (LSE).

“Currently, the driving event is the extraordinary scale of the fiscal stimulus, along with extraordinary monetary policy, that has been put in place,” he said, adding that, “what markets are seeming to price is a return to secular stagnation, or another way to put it is … Japanization.”

Secular stagnation is a period of little or no economic growth, while the term “Japanization” is often used by economists to describe long-term stagnation and deflation, typically accompanied by symptoms like high unemployment, real interest rates near zero, weak economic activity, and central bank stimulus, including quantitative easing.

“Japanization has been in the spotlight since the global financial crisis of 2008,” wrote Dino Lauria Ubatuba de Faria, CEO at Lince Investimentos, in a note.

“The term Japanization refers to the economic conditions of Japan during the two lost decades, which resulted in both low growth and deflation.” 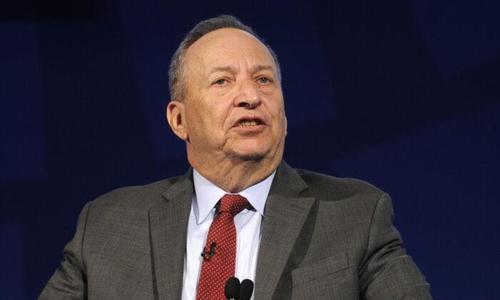 In a separate interview for International Economy magazine (pdf), Summers denounced what he called “woke central banking,” a condition where policymakers extend easy money policies in service of peripheral policy objectives, while losing sight of the need to rein in inflation.

“The climate today is of more woke central banking, where central bankers give speeches about challenges not proximally related to inflation or unemployment such as climate change, and reject the idea of preempting inflation in favor of the idea of waiting until inflation is firmly established,” Summers said.

“These things threaten a return to the kind of psychology that prevailed in the 1960s and 1970s and contributed to excessive inflation,” he warned.

Summers, who served as chief economist at the World Bank and is an emeritus professor at Harvard, told LSE that he “came to a diagnosis a few years after the financial crisis that the right way to conceptualize the economic problem of the industrialized world in the 21st century was in terms of difficulty of savings absorption.”

“That is exactly what we would expect if there was difficulty in generating excess demand—or adequate demand—because of a savings absorption problem,” Summers said.

“The judgment of markets is that real rates, for the next generation, are going to be negative, even in the presence of extraordinarily high, by historical standards, debt-to-GDP ratios and, prospectively for some significant number of years, relatively high fiscal deficits,” he said.

He said this shows that the problem of savings absorption is going to persist for “quite some time.”