Authored by Michael Snyder via TheMostImportanTNews.com,

Protesters in Seattle decided that they were going to give us a living, breathing example of how the world should really operate.  The police were completely kicked out of a six block area of downtown Seattle, and armed guards were posted at all the entrances to the “Capital Hill Autonomous Zone” in order to make sure that their “utopia” would not be interrupted.  At first, people were dancing and singing in the streets, free food was being passed out to everyone, gardens were being started, and free movies were being played at night under the stars.  It was such a glorious beginning for “CHAZ”, but within hours major problems began to develop. 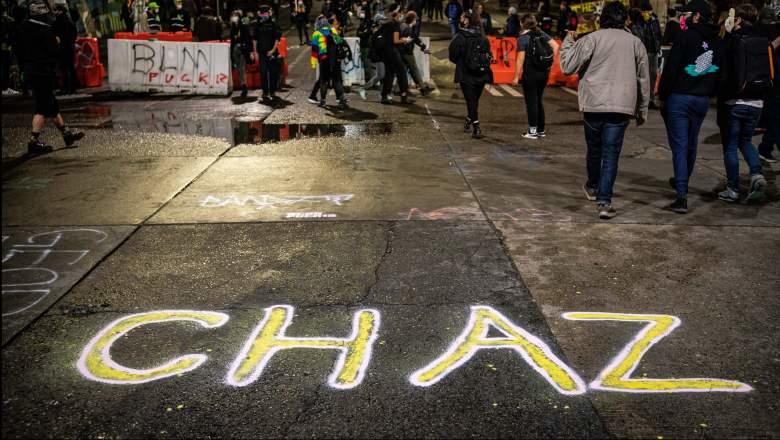 The protesters wanted to show everyone how compassionate they could be, and so they invited Seattle’s homeless population to share their free food.

Well, it turns out that the homeless people grabbed more of the food than they should have, and that created quite a crisis… 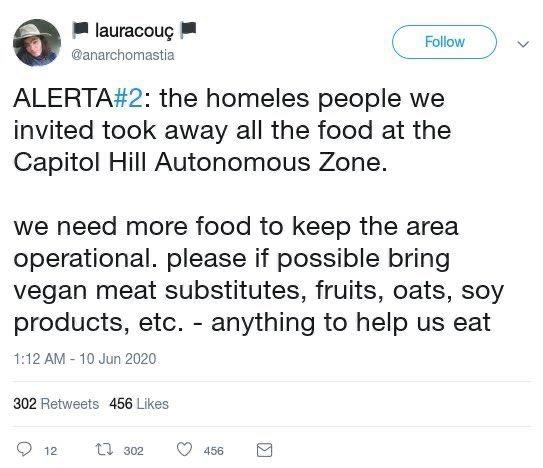 Yes, she was being quite serious.

If you live near CHAZ and you have extra “vegan meat substitutes, fruits, oats, soy products, etc.” laying around, there are some really hungry radicals that would really appreciate the help.

In addition to a looming food shortage, residents of CHAZ are also dealing with a leadership crisis.  Now that all the police are gone, it was just a matter of time before someone else took charge, and the person that has taken charge is a “heavily-armed” rapper named Raz Simone…

Seattle’s new “autonomous zone” – a six-block area established by protesters after the police and National Guard pulled out of city’s Capitol Hill neighborhood – now has a ‘heavily-armed’ warlord, and he’s already enforcing his streets.

Soundcloud rapper Raz Simone and his entourage have claimed the Capitol Hill Autonomous Zone (CHAZ) as their territory – and have already been filmed regulating when a man wouldn’t stop spraying graffiti over an urban art installation, telling him “We are the police of this community now!”

Somehow Simone was able to get his hands on an AK-47, and even though we keep being told that these are “peaceful protests”, Simone has told those under his command that what they are facing “is war”…

Simone, a local rapper with an AK-47 slung from his shoulder and a pistol attached to his hip, screamed, “This is war!” into a white-and-red megaphone and instructed armed paramilitaries to guard the barricades in shifts.

Before this stunt, hardly anyone had ever heard of Raz Simone, and I suppose that this is one way to make a name for yourself and sell a lot of records.

A SoundCloud rapper becoming the warlord in an Antifa insurgency-controlled autonomous zone in Seattle is proof we live in a simulation. pic.twitter.com/E15y65kj7K

At first, Washington Governor Jay Inslee insisted that he didn’t even know that activists had taken over a large section of downtown Seattle.

Later on, he changed his tune, and now he is saying that he is hoping for a peaceful resolution.

And hopefully that is precisely what we will see, but for now the protesters appear to be determined to dig in for the long haul.

Watch this news segment to better understand what is happening in the Seattle neighborhood occupied by far-left extremists. @GovInslee said he wasn’t aware this was even happening. #antifa #BlackLivesMatter pic.twitter.com/zWufjJU5kA

Needless to say, President Trump is not amused by any of this.

In fact, he is warning that if local officials do not shut down CHAZ, he will do it himself…

President Trump issued a demand for Democratic controlled Seattle to be brought back under order immediately, as Antifa anarchists claimed control of a six-block zone and a police station.

“Radical Left Governor [of Washington, Jay Inslee] and the Mayor of Seattle are being taunted and played at a level that our great Country has never seen before,” Trump tweeted late on Wednesday.

“Take back your city NOW. If you don’t do it, I will. This is not a game. These ugly Anarchists must be stooped [sic] IMMEDIATELY. MOVE FAST!’” he continued.

It is hard to believe that this is actually happening in America.

But as I keep warning, what we have seen so far is just the beginning.  As economic conditions deteriorate, Americans are just going to get even angrier and even more frustrated.

On Thursday, we learned that another 1.5 million Americans filed new claims for unemployment benefits last week…

About 1.5 million Americans filed first-time applications for unemployment insurance last week, the Labor Department said Thursday. That pushes the tally of those who have made initial claims – a rough measure of layoffs – over the past 12 weeks to a staggering 44.1 million.

This wasn’t supposed to happen.  Once states started reopening, the tsunami of job losses was supposed to stop, but instead we continue to see Americans lose their jobs at a pace that is far beyond anything we have ever witnessed in all of U.S. history.

As I keep reminding my readers, the all-time record for a single week prior to this year was just 695,000.  So until we get below that level, nobody should even think of using the word “recovery” to describe what is happening.

The truth is that the U.S. economy continues to fall apart all around us, and at this point even the New York Times is admitting that damage has been done “to millions of interconnections” throughout our economic system…

The fabric of the economy has been ripped, with damage done to millions of interconnections — between workers and employers, companies and their suppliers, borrowers and lenders. Both the historical evidence from severe economic crises and the data available today point to enormous delayed effects.

“There’s a lot of denial here, as there was in the 1930s,” said Eric Rauchway, a historian at the University of California, Davis, who has written extensively about the Great Depression. “At the beginning of the Depression, nobody wanted to admit that it was a crisis. The actions the government took were not adequate to the scope of the problem, yet they were very quick to say there had been a turnaround.”

If you think that the anger that we have experienced so far is something, just wait until you see what is coming in the years ahead.

We have entered a very disturbing new chapter in U.S. history, and events are beginning to spiral out of control.

Tens of millions of Americans have already lost their jobs, and the very generous unemployment bonuses that they have been getting are set to expire at the end of July.

A great deal of economic pain is on the horizon, a long, hot summer awaits us, and this is an election year.

All of that adds up to big trouble, and more major societal turmoil could be sparked at any moment.