A group of Palestinian prisoners serving life sentences in a remote Israeli prison managed to escape over the weekend in what appears to be the biggest jailbreak in modern Israeli history, prompting the IDF to launch a massive manhunt on Monday.

The manhunt was launched in northern Israel and parts of the West Bank after six Palestinian militants, all of whom were convicted of working with terror organizations (or the armed wings of certain Palestinian political organizations), with five of the fugitives belonging to the Islamic Jihad movement andthe sixth is a former commander of an armed group affiliated with the mainstream Fatah party, according to Reuters.

The men escaped from Gilboa prison in northern Israel. Four of the six were serving life sentences. Arik Yaacov, the service’s northern commander, said the escapees appeared to have opened a hole from their cell toilet floor allowing them to access passages formed by the prison’s construction. 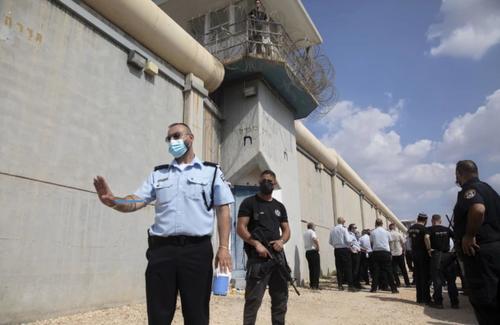 The facility, situated about 4 km from the boundary with the occupied West Bank, is one of the most high-security jails in Israel. It holds Palestinians convicted, or suspected, of helping anti-Israeli organizations, including planning deadly attacks.

Officials say they have erected roadblocks and are conducting patrols in the area, while Israel’s Army Radio reports that 400 prisoners are being moved as a preventive measure against any additional escape attempts. The radio said the prisoners escaped through a tunnel from the Gilboa prison, which is supposed to be one of Israel’s most secure facilities. The men reportedly appeared to have received some outside help.

The PM said he was receiving constant updates on the prison break, which happened just hours before the start of Israel’s celebration of the Jewish New Year (Rosh Hashanah). Authorities apparently do not suspect the escaped prisoners to pose a threat to the general public, and have issued no instructions for people to alter their routines. The prison is about 2.5 miles from the West Bank border.

Meanwhile, several Palestinian factions hailed the jailbreak, per the LAT:

Police commander Shimon Ben Shabo says officials are reinforcing emergency response call centers in the area to respond to any reports about the prisoners. Police are available to arrive at any area, on demand, should the prisoners be found or spotted.

The escapees are believed to be headed for the West Bank city of Jenin (if they haven’t arrived already), where the internationally recognized Palestinian Authority wields little control and where militants in recent weeks have openly clashed with Israeli forces. Israeli helicopters were seen flying over Jenin on Monday morning.

While the search continues, the Israeli press has already moved on to the ‘blame game’ stage of the public backlash over the jailbreak, with one Haaretz writer claiming the security shortcomings at the jail had been known to the government for some time, but nothing was done. It also accused several prison commanders of ignoring warnings from a lower-ranking official. The writer also complained about the decision to house the prisoners together, as it’s clear the escapees worked together for months to dig a tunnel that would allow them to slip out of the compound.

Too bad this latest public backlash appears set to spoil the PM’s holiday.