Into The Swarm #1: Archegos In The Coal Mine

Submitted by Romain Bocher of The Swarm Blog

While the S&P 500 keeps rallying and hitting new records, the spectacular collapse of Archegos family office brought a sharp reminder of the consequences of excessive leverage in the financial system. 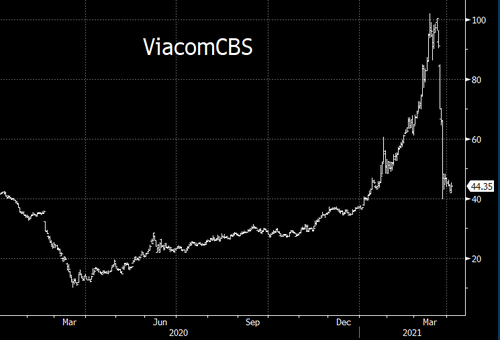 As always, Warren Buffet had already warned us: “Having a large amount of leverage is like driving a car with a dagger on the steering wheel pointed at your heart. If you do that, you will be a better driver. There will be fewer accidents but when they happen, they will be fatal.”

I do not know what the worst part of that story is. Whether it is the fact that Bill Hwang had a criminal record. Or that Archegos used the same collateral to enter contracts with up to seven banks boosting leverage as high as 500%. Or if it is Nomura’s reaction, saying basically that whatever happens central banks will rescue banks if needed. Nothing seems to matter anymore for a system accustomed to perpetual bailouts since the LTCM failure.

But beyond those ethical considerations, the Archegos collapse has taught a few interesting things about US capital markets.

The first lesson for investors is the fact that years of lose monetary policy have laid the ground for moral hazard and very risky bets, as evidenced by the  record of margin debt. And the higher the leverage ratio, the bigger the vulnerability to unexpected moves. 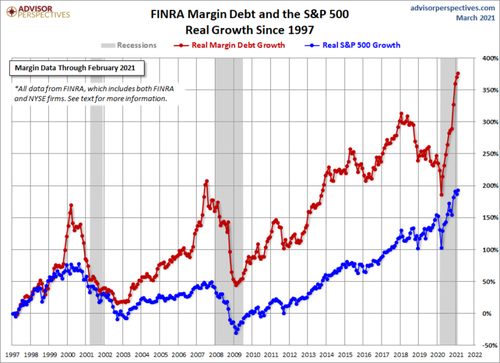 The subprime crisis was a perfect illustration of that issue, as it “only” took a 11% drop of US home prices and a 1.5 expansion of the delinquency rate on mortgages to funnel the global banking industry toward the cliff in September 2008. In a highly leveraged system, you do not necessarily need a violent crash to generate significant losses and trigger a bigger crisis.

Using debt to go all-in on stocks on like ViacomCBS which had already started to move vertically was not the smartest thing to do in my opinion, as such technical patterns often signal imminent ruptures. It is hard to believe that professionals who managed those amounts of money got caught in such an absurd situation, but I do think that other players will exhibit similar losses sooner or later, as most participants have caved to the mania and have assumed that equities cannot go down anymore.

More and more participants display “Gaussian-like behavior,” meaning that they tend to unconsciously underestimate the probability of occurrence of large volatility spikes (i.e. significant drawdowns). And I am not only talking about retail investors. The whole market has turned extremely bullish, and everyone believes that “the Fed has our backs” and that there will always be someone to bid if necessary.

That brings us to the second lesson of the Archegos collapse, which is how illiquid can assets suddenly become when a big seller comes out.

The concept of liquidity can be very misleading, as past trading volume is no guarantee of future liquidity. Indeed, the convexity of the order book means that if the selling flows become too big, then there may be no bid unless the price adjusts significantly to the downside (I recommend the following thread on Twitter by @FadingRallies). 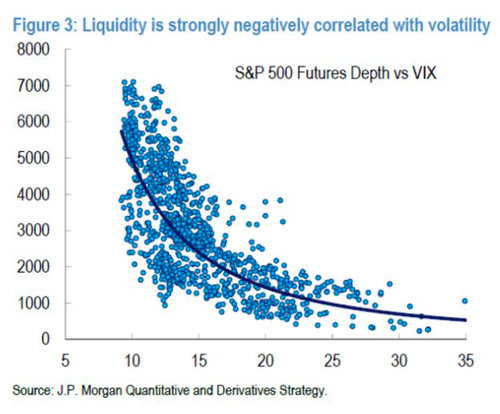 In fact, there is a nonlinear and negative relationship between depth and instantaneous volatility, meaning that the liquidity of equities is likely to shrink whenever the VIX spikes. Therefore, the idea that there will always be someone to bid and to buy the dip, even on large cap shares, can be proven wrong.

As the S&P 500 is trading above 4k, it is important to bear in mind that any unexpected situation leading to forced selling could trigger a problematic situation. And even though people tend to naturally display “Gaussian-like behavior,” everyone should remember that volatility spikes are distributed following some form of power law (see my paper on that topic), meaning that extreme fat-tail events occur more frequently than what the general public thinks.

And in my opinion, there is not much the Fed can do about it.

I often say that financial markets are all about intersubjective narratives. Thus, I have created this second section to analyze the narratives at play.

The past months have been characterized by a once-in-a-lifetime buying frenzy, with millions of retail investors entering the market as wannabee gurus like Dave Portnoy kept saying that “stocks ony go up.” The corollary of this phenomenon has been the “you only live once” philosophy (YOLO), justifying any risky trade by the idea that nothing really matters anymore on markets.

For months, we have seen people chasing stocks like Tesla, Virgin Galactic, Zoom, or Peloton, whatever the price. Then, we have seen them rushing to purchase out-of-the-money call options to maximize their profits, leading to the so-called “gamma squeeze.”

However, while everyone expected Americans to massively spend their second check on the market, the YOLO trade has started to exhibit signs of weakness recently. And as already mentioned in a previous post, the launch of the Buzz ETF may have coincided with the top of the retail mania (see Whale Beaching).

But beyond the lower volume on equity call options, it is worth highlighting the recent disappointing performance of indices tracking IPOs or SPACs (see charts below).

The thing is, there has been a record level of equity issues, and most of them were YOLO names. And not only on the stock market, as there have also been record amounts issued on the convertible bonds segment, most of the issuers being companies like Beyond Meat, Airbnb, Peloton, etc.

After all, maybe the market is reaching its digestive limits.

Even if the Nasdaq managed to bounce back to mid-February levels, the recent moves have been characterized by negative internals, meaning that US tech indices have been mainly driven by FAANGs, while many YOLO stocks have struggled to recapture the powerful trend of the past months.

Does it mean that the party is over? I have learned to be careful about calling the top, but I do believe that a bubble is all about a narrative, and thus when the dominant narrative starts to weaken, it is time to seriously question the validity of the bull thesis.