This week, while perusing the Federal Reserve’s balance sheet figures, we came across a rather curious note.  We don’t know how long the Fed’s had this note posted to its website.  But we can’t recall ever seeing it.  The note reads as follows:

“The Federal Reserve’s balance sheet has expanded and contracted over time.  During the 2007-08 financial crisis and subsequent recession, total assets increased significantly from $870 billion in August 2007 to $4.5 trillion in early 2015.  Then, reflecting the FOMC’s balance sheet normalization program that took place between October 2017 and August 2019, total assets declined to under $3.8 trillion.  Beginning in September 2019, total assets started to increase.”

Directly below this note is the following chart: 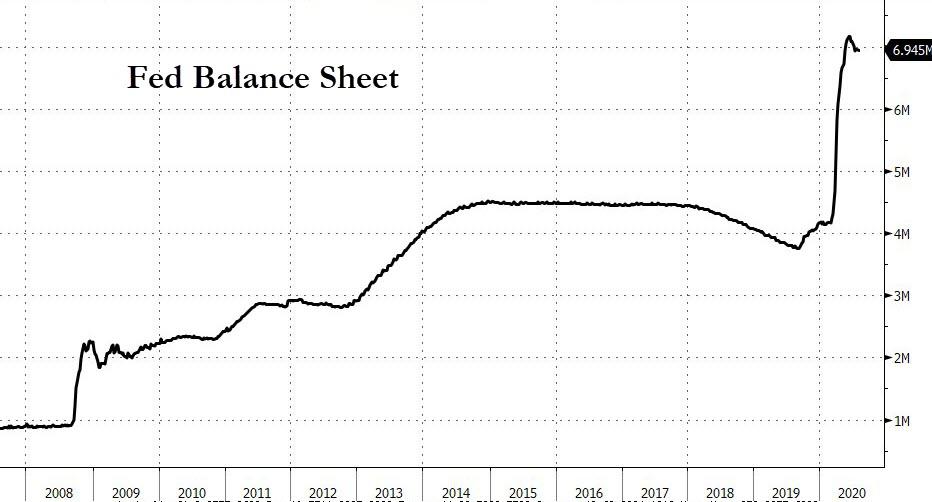 Does this look like a balance sheet that expands and contracts over time?

Quite frankly, the Fed’s balance sheet chart, and the extreme dollar debasement that it illustrates, is a disgrace.  The fact that the Fed had to add this flagrantly false note as preface to its disgraceful chart is an insult.

This is a direct offense to anyone that’s built a modest savings account by exchanging their time for dollars.  The time and effort put to obtaining these dollars is being stolen by the insidious process of central bank engineered money supply inflation.  Year in and year out, these earned dollars will be worth less and less.

Moreover, normalization is a Fed lie.  It never happened.  Yes, $700 billion was contracted from the Fed’s Balance sheet between October 2017 and August 2019.  But that was in the wake of a $3.5 trillion expansion.  And it was quickly followed by another $3 trillion balance sheet expansion this spring.

A secondary effect – for now – of the Fed’s balance sheet expansion is a booming stock market.  This, like the Presidential election, is a distraction. 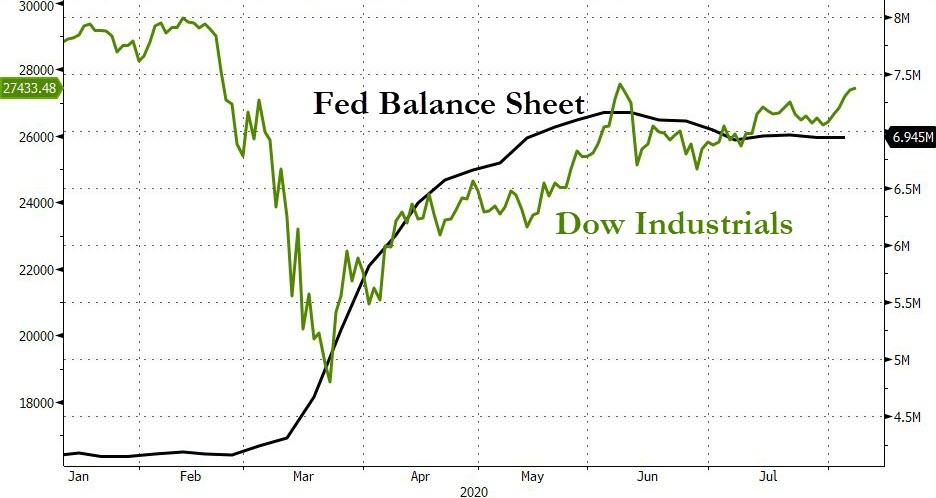 What we’re talking about here are interest rates.  If you haven’t noticed, they’ve been going down as of late.  In fact, they have been going down a lot.  The yield on the 10-Year Treasury note dropped to nearly 0.5 percent earlier in the week.

Modern era Treasury rate data has been continuously recorded since 1871.  The lowest yield on the 10-Year Treasury on record dating back 149-years was reached this week.  What’s going on?

Attaining this remarkable milestone took decades of lies, propaganda, and relentless intervention by central planners.  A good portion of the Fed’s balance sheet assets, shown on the chart above, are U.S. Treasuries.

The Fed expands its balance sheet, via digital ledger notations, and buys Treasuries.  This is called monetizing the debt.  This, in essence, is printing press money – as in, money printer go BRRR.  Washington then spends this fake brrr money via government contracts, government programs, CARES Act stimulus, and whatever other spending bills Congress passes.

The vertical jump on the right side of the chart, for year 2020, is composed of Treasury notes that were bought with fake brrr money to fund the CARES Act.  This coordinated attack on your dollars by the Fed and the U.S. Treasury is what makes the $26.6 trillion national debt possible.

The Dollar Is Dying

This fake brrr money functions just like Federal Reserve Notes (i.e. dollars) that were obtained through honest labor.  Yet, as the fake brrr money’s spent, the wealth of savers – including your wealth – is debased.  The dollar becomes worth less and less.

One of life’s unspoken delights is the rich satisfaction that comes with bearing witness to the spectacular failure of an offensive and unjust system.  We just wish it wasn’t so damaging to so many good and honest people.

The dollar is being destroyed before us.  This destruction has been going on for 107 years; since the passage of the Federal Reserve Act in 1913.  And it has been going on in earnest since President Richard Nixon closed the gold window in 1971.

But with the Fed’s and U.S. Treasury’s attempt to paper over the economic consequences of government lockdown orders by running a $4 trillion budget deficit, something special is going on.  The dollar is dying.  Yet the clowns in Congress are the last to see it.

The art of plundering and the increasing corruption of public officials is on full display in the next stimulus bill that’s making its way through Congress.  The general premise is that the ordinary needs of people, including housing and living expenses, may be legitimately met by the means of fake brrr money.  Then there’s all the pork, stuff like a new FBI building, that’s larded into the bill.  All the while, the increase in the money supply grows every day more appalling.

Such vigorous and persistent attempts to substitute natural laws in finance for the wishes of legislatures are doomed.  We’re headed to complete financial, moral, and political collapse.  The rush to exit dollars is gaining momentum…