Google had previously said in May that three states, Alabama, North Dakota and South Carolina, would be launching apps using the exposure notification tool. Those states are still using the protocols, it appears.

Additionally, the company said during its update that 16 countries and regions outside the US have launched apps using the Apple-Google tool, while other countries – including France and the UK – have sought to build their own tools from scratch, though the UK infamously pivoted, abandoned its custom system, and adopted the Google-Apple protocol.

However, the UK has yet to launch this new app, and it’s unclear when it will be ready, as the Telegraph recently reported.

Here’s how the UK’s app-based system (which is based on the Google-Apple system) is supposed to work, per the Telegraph. 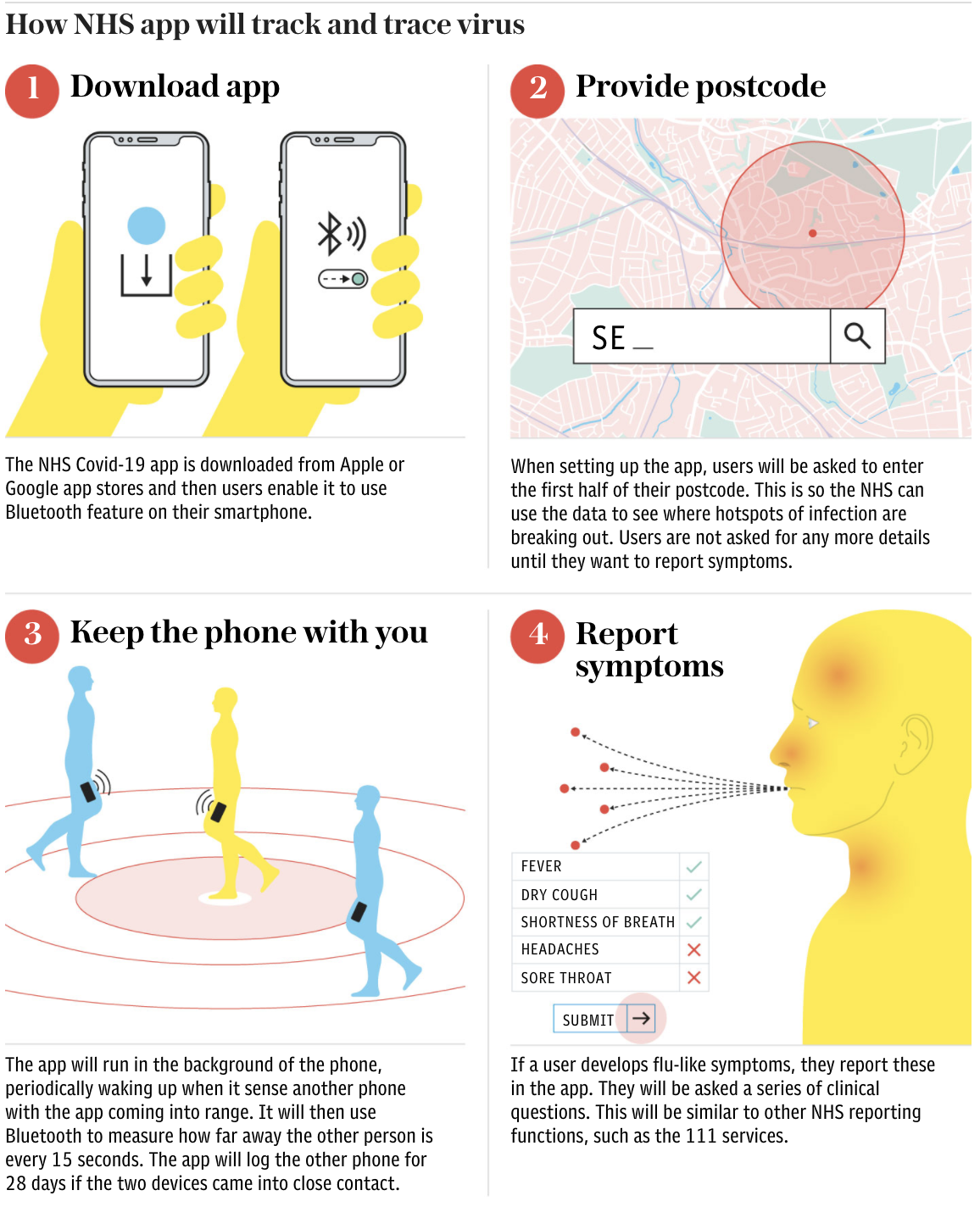 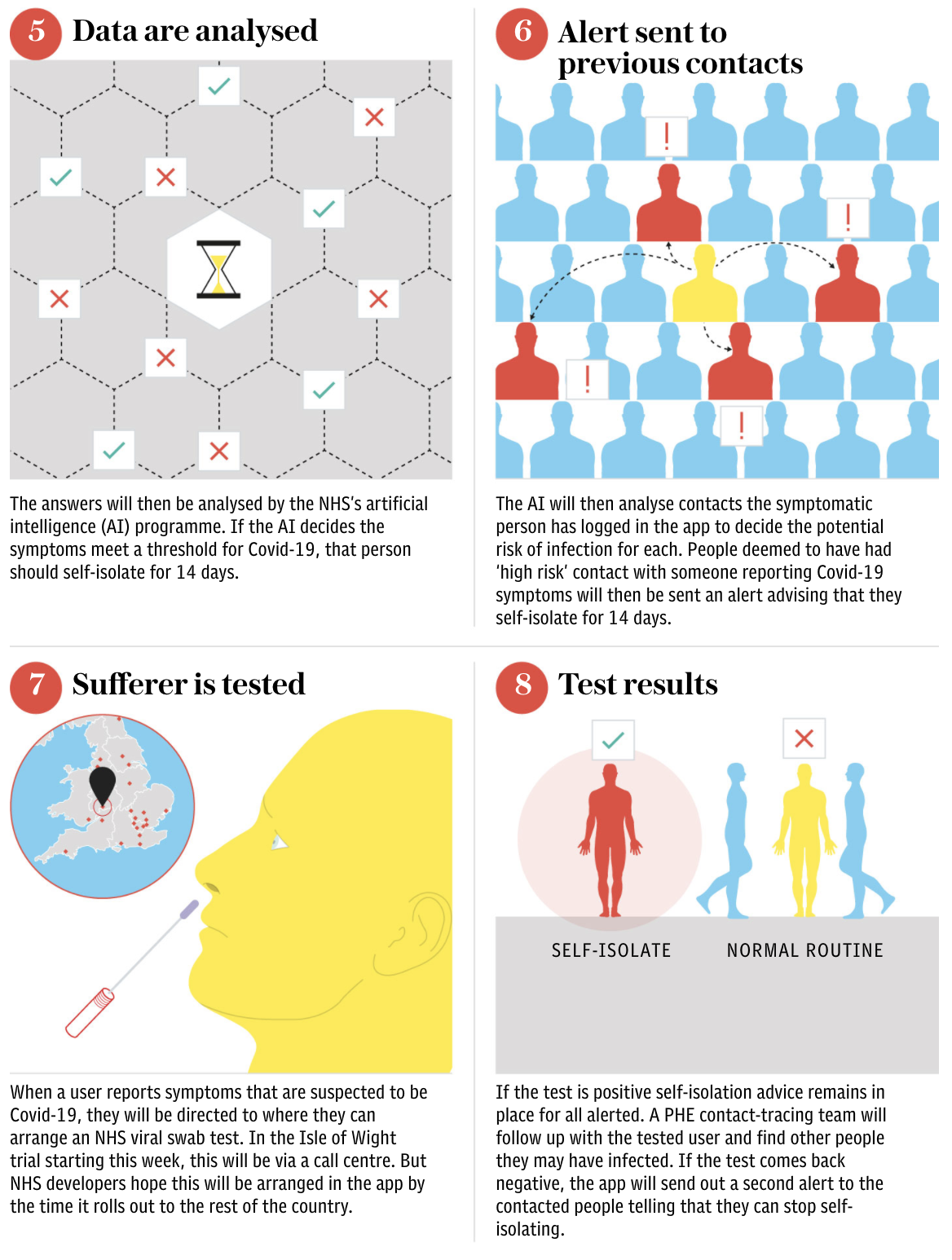 The technology should enable users to track whether they came in contact with any infected people via bluetooth signals.

VP of Engineering David Burke penned the post, which was published Friday afternoon on the East Coast. Read it in full below:

In the United States, 20 states and territories—representing approximately 45 percent of the U.S. population—are exploring apps based on ENS. We expect to see the first set of these apps roll out over the coming weeks. The Association of Public Health Laboratories also announced recently that it will host a national key server to support all U.S. states, which will allow people with Exposure Notification apps to receive alerts even if they travel across state borders.

We’ve continued to improve the technology and provide more transparency based on feedback we’ve received from public health authorities and other experts. Public health authorities will continue to make their own decisions about how exposure notifications become part of their plans in controlling COVID-19, and we will work to improve the technology in response to their feedback. Here are some of the changes we’ve already made, as well as some upcoming additional changes.

Improvements to the Exposure Notification API

Since the Exposure Notification API was publicly released in May, we’ve spoken with dozens of public health authorities to understand how the API could be improved to help them better manage the COVID-19 pandemic while preserving privacy. Based on this feedback, we recently launched an update to the API, which includes the following changes:

When an exposure is detected, public health authorities now have more flexibility in determining the level of risk associated with that exposure based on technical information from the API.

Bluetooth calibration values for hundreds of devices have been updated to improve the detection of nearby devices.

We’ve improved clarity, transparency and control for users. For example, the Exposure Notifications settings on Android now include a simple on/off toggle at the top of the page. In addition, users will also see a periodic reminder if ENS is turned on.

Reference verification server to help guide public health authorities in building a server that allows verification of test results when users report themselves as positive for COVID-19.

Implementation code showing how the Exposure Notification API works underneath the hood.

Telemetry design explaining what de-identified diagnostics data is collected to ensure that ENS is functioning properly and securely.

Additional technical resources will be publicly shared as we continue to improve ENS.

The Exposure Notifications website has more information about ENS, and offers educational and technical resources, as well as the latest updates.

As a quick reminder, here are some of the core privacy protections that were built into ENS:

You decide whether you want to use Exposure Notifications—it’s off unless you turn it on.

ENS doesn’t use location data from your device.

Your identity is not shared with Google, Apple or other users.

Only public health authorities can use this system.

Finally, we’ve received questions about why your Android device location setting has to be turned on if you want to use an Exposure Notification app. We want to explain why this particular setting needs to be on, and how you can control your location settings on Android.

To be absolutely clear, ENS does not use device location, and the policies for using ENS prohibit public health authority apps from requesting or collecting device location. Instead, ENS uses Bluetooth technology to detect when two devices are near each other, without revealing the location of either device. While Bluetooth scanning doesn’t necessarily reveal location, it can in some cases be used to infer your device’s location. For example, if a shopping app scans for the Bluetooth signals of a stationary Bluetooth beacon located inside a store, then the app could infer that you went to that store. So in 2015, with privacy in mind, we designed the Android operating system to prevent Bluetooth scanning unless the device location setting is on. At that time no one could have anticipated that Bluetooth scanning might one day be helpful in controlling a global pandemic like COVID-19.

We’re committed to supporting public health authorities as they build tools to fight COVID-19. We’ll continue to improve ENS based on feedback, while ensuring that people can trust in the privacy-preserving design of this technology.