Authored by Susan Crabtree via RealClearPolitics.com,

One of several private charter planes carrying dozens of U.S. citizens, at-risk religious minorities and Afghan allies was granted State Department clearance to leave Afghanistan early Friday morning after an unsettling 48 hours in limbo as those desperately trying to leave waited for the U.S. government to sign off on the evacuation, according to knowledgeable sources on Capitol Hill and Washington’s foreign policy community. 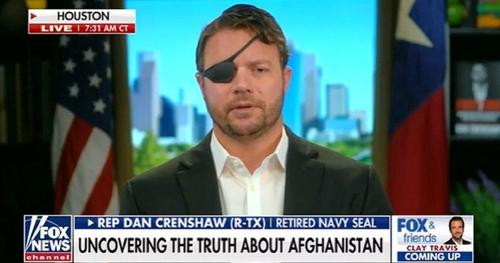 Rep. Dan Crenshaw, a Texas Republican who served on a SEAL team in Afghanistan, issued a flurry of tweets over the last 24 hours blaming the State Department for keeping multiple private chartered planes grounded in Afghanistan, a charge the department has publicly denied without specifically mentioning Crenshaw’s assertions.

“Good news, just got word that State Department now helped us get clearance for at least one of these private efforts to land in a nearby country,” he tweeted.

In several previous tweets, Crenshaw angrily lashed out at department officials, blaming them for blocking an effort “to get a plane of U.S. citizens and allies out of Afghanistan.”

“They need @SecBlinken to help get clearance for the plane to land in a nearby country,” he tweeted Thursday.

In previous Thursday tweets, Crenshaw provided only limited details about his interactions with State and negotiations with third-party countries to accept the passengers. His office did not respond to requests for elaboration on why the department had a role to play in a private flight to a third-country destination. Other unconfirmed reports have indicated that the private organizations funding the travel were working to secure landing commitments from nearby countries.

“Even worse, State Department agreed to give me the contact info for US embassies in these countries so we could go point to point,” Crenshaw tweeted.

“That was hours ago. I’ve followed up multiple times, and they’ve provided nothing.”

A source with first-hand knowledge of the grounded planes said American citizens and Afghan allies waiting to depart experienced a chaotic 48 hours, especially the last 24, when a State Department official gave a verbal okay for the plane to leave without providing the necessary written authorization, then rescinded the clearance just hours later.

Several other planes in the same group – each carrying at least a dozen American citizens – are still awaiting an okay from U.S. officials to leave, the source said. RealClearPolitics is not reporting where the planes are located in Afghanistan and which third-party country or countries they are trying to reach because of security concerns.

But now, Price said, “we’re in a different phase,” one in which the U.S. has no assets in Afghanistan and therefore cannot control the airspace – in that country or elsewhere in the region. Still, he said, State is trying to expedite and facilitate landings in third-party countries, although he insisted it’s not something the American government can control.

“The idea that we could prevent a charter flight from taking off is simply not true,” he said. Still, he indicated that State is preventing private flights from heading to U.S. military installations out of concerns for the security of personnel who work there, as well as the security of Afghan refugees already airlifted to those locations.

The apparently new concern about allowing passage of planes with American citizens and unvetted Afghans on them has some members of Congress scratching their heads. Since the last U.S. troops left Afghanistan three days ago, the Biden administration has boasted about its historic airlift operation that evacuated more than 120,000 people since mid-August.

But State Department officials have not fully explained why agency officials have maintained that the evacuation efforts have been aimed at helping U.S. citizens and Afghans who assisted in the war effort — and are eligible for a special visa — but have allowed the vast majority of Afghan evacuees to be brought to U.S. military bases under a status known as parole. The homeland security secretary can provide instant parole status as a blanket way to admit people by considering humanitarian concerns or reasons benefiting the U.S. national interest. Normally, achieving a Special Immigration Visa, or SIV, can take 18 to 24 months.

Some 20,000 Afghans were airlifted to military installations in the United States in recent weeks while another 43,000 were evacuated to overseas U.S. bases in hopes of eventual resettlement in the U.S., according to Pentagon officials.

Rep. Chris Smith, a New Jersey Republican and longtime human rights champion, spent Thursday touring the Afghan refugee facilities at Joint Base McGuire-Dix-Lakehurst in his district, along with U.S. Northern Command Gen. Glen VanHerck. Smith lauded the compassion and dedication that servicemen and women have displayed in assisting the thousands of Afghan refugees who have arrived there this week.

“There is both a compelling need and moral obligation to provide immediate safe haven and humanitarian aid to those who have fled unspeakable cruelty, violence and terrorism perpetrated by the Taliban and ISIS-K,” he said.

But Smith also expressed deep concerns about the vetting process, or lack thereof, which he said allowed 70% of those being housed at the base to arrive here on parole without documentation that they ever assisted U.S. in Afghanistan. The congressman, who has served in the House for 40 years, found the statistic particularly troubling considering news that the majority of interpreters and other visa applicants were left behind in Afghanistan, as reported by the Wall Street Journal.

“While we welcome them as we should — these are people who have suffered so much — we have to make sure they are who they say they are to the best of our ability,” he said, stressing the importance of protecting those who work on the base, as well as other refugees now housed there, from a terrorist attack or other criminal behavior.

Smith recalled an incident during the war in Kosovo when he was on hand at the same New Jersey base to welcome 4,400 refugees. One of those refugees, Agron Abdullah, was apprehended years later and sent to jail in 2008 for supplying guns and ammunition to the “Fort Dix 4” – a group of terrorists who were imprisoned for plotting to kill American soldiers at the installation.

“Despite the vetting process used then, he was missed,” Smith told RCP.

“We cannot allow that failure to happen again.”

The Washington Times reported Wednesday that a previously convicted rapist who was deported from the U.S. in 2017 was among the Afghan refugees who recently landed at Dulles Airport outside Washington, D.C. The man was flagged by border officials at Dulles and then sent to a detention facility in Bowling Green, Va.

Smith, one of the most ardent human rights champions in Congress, also said he recently tried to push senior Biden administration officials to establish humanitarian corridors in Afghanistan, with NATO allies’ support, as a way to continue the evacuation of both U.S. citizens and Afghans who assisted the U.S. government. Such safe havens also could help provide shelter, food and health care to displaced Afghans and those seeking to leave. Smith said senior U.S. officials rebuffed him without explaining why it couldn’t be done.

Smith is not the only one with deep concerns about the chaotic and deadly exit from Afghanistan. He and several other current and former members of Congress argue there’s little evidence so far that the State Department prioritized the evacuation of religious minorities, such as Christian converts, Sikhs, Shiites  and other sects who are facing death sentences from the Taliban and ISIS.

Sam Brownback, the former senator and governor of Kansas who served as ambassador for religious freedom during the Trump administration, is part of a loose cadre, including Christian charities, veterans and former special operators, trying to secure safe passage out of Afghanistan for thousands of religious minorities who remain in hiding after the U.S. troop withdrawal.

“I’ve got a list of hundreds of individuals desperate to get out … now being hunted by the Taliban or other groups,” Brownback told RCP in an interview earlier this week.

The Nazarene Fund, an organization founded by Glenn Beck that seeks to help persecuted Christians abroad, has said it has successfully rescued 5,100 Christians and other at-risk people from Afghanistan. The fund has managed to raise some $30 million in recent weeks in response to the crisis.

So far, Brownback says, there have been no firm commitments from the State Department to make evacuating religious minorities a priority despite recent history in Iraq demonstrating the need to protect these communities. In fact, it was the ISIS slaughter of Christians and Yazidis in northern Iraq seven years ago that forced President Obama to send thousands of U.S. troops back into the region after pulling all troops out of Iraq in 2011. Then-Secretary of State John Kerry declared the ISIS slayings a genocide in 2016.

“This is not a new phenomenon to us,” Brownback said. “Most genocides happen to religious minorities.”

A State Department spokesperson pushed back at Brownback’s assertions.

“Our commitment to individuals at-risk in Afghanistan will not end,” the spokesperson told RCP in a statement Thursday.

“The United States is working vigorously with the international community to explore all options to support vulnerable populations in Afghanistan, including — but not limited to — women, children, journalists, persons with disabilities, and members of ethnic and religious minority groups and other extremely at-risk populations, as well as additional movements of persons who wish to leave Afghanistan in the coming weeks and months.”

A bipartisan group of senior foreign policy leaders on Capitol Hill is questioning that commitment after the U.S. was unable to evacuate journalists working for the U.S. Agency for Global Media. Many of the 500 members of that group, including their Afghan families, were turned away at the gates of Kabul airport before the withdrawal deadline even though senior Biden administration officials had told top USAGM official that the journalists would make it through.

“It is absolutely disgraceful the U.S. State Department claimed they evacuated their local employees when in reality they abandoned hundreds of USAGM journalists and their families. Some of these journalists were given express assurances by the Biden Administration that they would be treated as locally employed staff – but were not,” Rep. Michael McCaul, the ranking Republican on the House Foreign Affairs Committee, said in a statement on Tuesday.

Former Rep. Frank Wolf, a Republican from Virginia, predicted a “very dark period ahead” for America’s credibility on human rights if the U.S. doesn’t fulfil its commitment to evacuate all at-risk Afghans. Wolf spent more than three decades in Congress advocating for human rights, fighting for persecuted religious minorities and warning about the terrorist threat emanating from the Middle East before 9/11.

Wolf pointed to Blinken’s remarks in late March, in which the new Cabinet secretary took issue with the Trump administration for what he said was an “unbalanced” emphasis on religious liberty over other concerns, such as victims of human trafficking, treatment of LGBTQ individuals abroad and women’s access to abortion, birth control and other reproductive options.

“Human rights are also co-equal. There is no hierarchy that makes some rights more important than others,” Blinken said at an event unveiling the State Department’s 45th annual report on the status of human rights around the world.

“… At my confirmation hearing, I promised that the Biden-Harris administration would repudiate those unbalanced views. We do so decisively today.”

If the U.S. doesn’t shift gears and make evacuating religious minorities a top priority, Wolf says it could not only spur a new genocide but also destroy U.S. credibility in condemning other countries’ persecution of ethnic and religious groups. Wolf specifically mentioned the U.S. ability to call out China’s treatment of the Uyghurs, the longtime persecution of Christians in Iran, the slaughter of Christians by Boko Haram and other Nigerian terrorist groups, as well as the efforts to help rebuild Christian and Yazidi areas in northern Iraq decimated by ISIS.

“It will be a disaster for America, not only in Afghanistan. … America’s credibility has been devastated worldwide,” Wolf told RCP Thursday evening. “I’ve never seen American look so weak and ineffective.”