Authored by Adam Andrzejewski via Forbes,

In a January article published at Forbes, our auditors at OpenTheBooks.com found that Dr. Anthony Fauci was the highest paid federal employee, earning $417,608 (2019).

Dr. Fauci is still the top-paid federal employee earning $434,312 in 2020. Fauci is the Director of the National Institutes of Health’s (NIH) National Institute of Allergy and Infectious Diseases (NIAID) and current Chief Medical Advisor to the President. 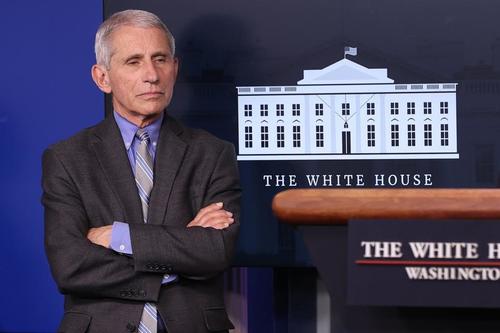 Now, new documents released via our Freedom of Information Act (FOIA) requests from the NIH tell us a lot more. Dr. Fauci received a big pay hike for his biodefense research activities. In other words, Fauci was paid to prevent future pandemics.

The documents released to our non-profit organization OpenTheBooks.com reveal that Dr. Fauci was approved for a “permanent pay adjustment” in excess of his regular salary in December 2004, during the George W. Bush Administration.

Fauci’s permanent pay raise was to “appropriately compensate him for the level of responsibility… especially as it relates to his work on biodefense research activities.”

However, critics say that Fauci was funding research that was actually creating pandemic pathogens in labs that, if leaked or if fell into the wrong hands, might create the very human pandemic they were trying to prevent.

Released here, for the first time, is a portion of NIH’s response to our OpenTheBooks FOIA request. These documents highlight Fauci’s central role in pandemic preparedness funding and biodefense strategies in the years leading up to the COVID-19 pandemic.

Included in the NIH production is a letter, date stamped December 15, 2004, from Dr. Raynard S. Kingston, the then-Deputy Director— which was approved and signed by Dr. Elias Zerhouni, the NIH Director under George W. Bush. The letter reads:

Redactions labelled (b)(6) under federal FOIA, fall under a large range of categories protecting the employee’s personal information. These redacted items are likely dollar figures, including his salary at the time, which apparently NIH still deems redaction worthy – even 17 years after the fact.

We have already posted his salary back to 2010, but our auditors at OpenTheBooks.com discovered Fauci’s salary records as far back as FY2004. It’s settled transparency law that Fauci’s compensation falls under open records law.

So, why is NIH redacting financial information from 2004 that is 17-years old? Perhaps the answer is in the numbers…

Dr. Kingston’s 2004 letter regarding Dr. Fauci explains some background for his proposed raise:

“More recently, Dr. Fauci has been a key figure in the White House and Department’s response to bioterrorism. His contributions to this effort have been outstanding and include the development of the departmental strategy to augment smallpox vaccine supplies and the development of a plan to develop new anthrax vaccine. He serves as an expert consultant to the White House, the Secretary of DHHS, congressional staff, and a number of HHS groups on the development of biodefense-related research, and public health priorities. He is leading the development of a series of research initiatives, has coordinated fast-track initiatives for academia and industry participation in biodefense-related research, and is responsible for the development of future intermediate and long-range research plans and policies for a sustained and committed biomedical research response to bioterrorism threats. During FY2004, under Dr. Fauci’s leadership, NIAID significantly expanded, intensified, and accelerated its research programs in biodefense.”

The timeline leading up to Dr. Fauci’s “permanent pay adjustment” is key to understanding Dr. Kingston’s recommendation letter and its approval by Dr. Zerhouni.

Over the years, NIH funding has gone towards numerous grants categorized as pandemic-prevention research, including grants for research on bat coronaviruses, both in the U.S. and abroad. Justification for the funding centered around trying to prevent the next pandemic and preventing a possible spillover of viruses from nature to humans.

Some of the biodefense research Dr. Fauci’s NIAID funding came under fire from fellow scientists as too risky. Critics said that Fauci was funding research in labs that was actually creating pandemic pathogens that, if leaked or if fell into the wrong hands, might create the very human pandemic they were trying to prevent.

DARPA documents included in the leak show the agency rejected the grant proposal as too risky, but the fact that most all of the DARPA grant applicants are or were at the time recipients of NIH NIAID funds, under Dr. Fauci, either directly or through subgrants, has raised more than a few eyebrows.

Few of these controversies made it into mainstream news cycles, most likely never would have except that in December 2019 the world learned of a novel respiratory coronavirus emerging in Wuhan, China – the very same city that had a lab that did pandemic bat virus research. Ironically, the Wuhan lab was funded with $600,000 in NIAID subgrants from Fauci’s agency’s biodefense funds, as the doctor himself admitted to Congress.

On January 27 and May 17, 2021, we asked NIH for Dr. Fauci’s fiscal year 2020 and 2021 financial and conflict-of-interest disclosure forms; job descriptions; and all employment contracts, amendments, modifications, and addendums; respectively.

Dr. Fauci is required by federal law to file these forms with his employer, the National Institutes of Health. It has been nine months and NIH has yet to produce most of the requested documents.

To say that that the details of Dr. Fauci’s employment are of the public interest – after almost two years of government decisions influenced by him – is an understatement.

Note: Dr. Fauci and his agency did not respond to our request for comment before publication.