Preliminary results of the 2021 gubernatorial recall election are in and AP, ABC, & DecisionDeskHQ (among others ) have called the race for Gavin Newsom (who will likely not be recalled and will remain governor of California). 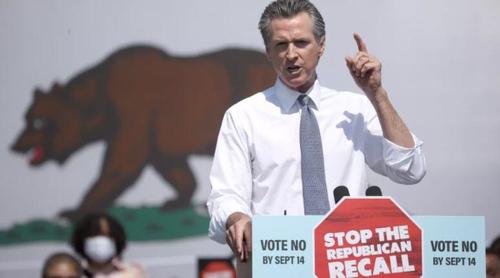 Around 67.1 percent of people voted “no” in the election, according to the California Secretary of State’s Office, while 32.9 percent voted “yes.” 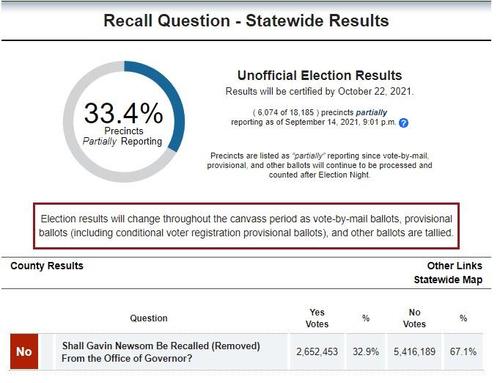 Larry Elder has received the most votes at 43.4 percent for who would replace Newsom if he is recalled. 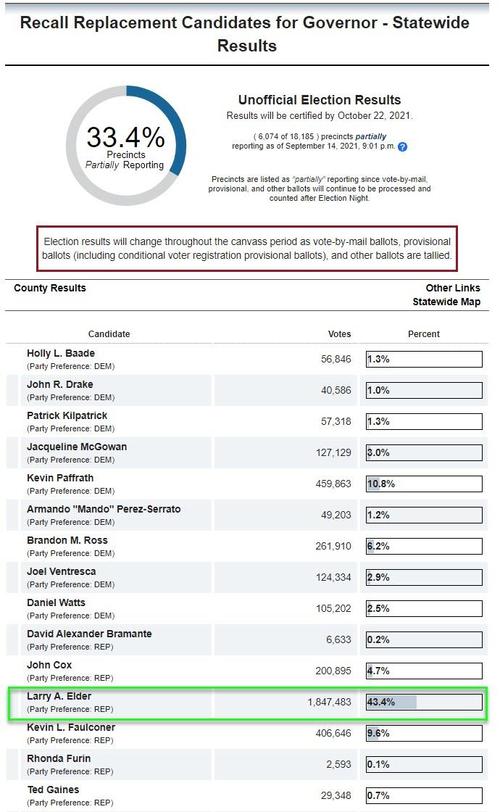 As The Epoch Times’ Vanessa Serna reports, in the 2018 gubernatorial election, Gov. Gavin Newsom was elected by the widest margin in an election race since 1950. Since his time in office, Newsom has faced criticism for his decisions to close prisons, suspend the death penalty, enforce vaccine mandates, and enforce COVID-19 statewide restrictions.

The grassroots effort to recall the governor began in 2020, more than a year before the recall petition cleared on June 23, 2021 and state officials confirmed there were over 1,495,709 signatures, the amount required to hold a special recall election.

In previous interviews with The Epoch Times, recall organizers attributed the impetus of the recall campaign to the governor’s decisions regarding COVID-19 state-mandated shutdowns and restrictions.

At the height of the pandemic in Nov. 2020, Newsom received backlash after attending a party at the French Laundry restaurant without wearing a mask and with visitors from multiple households—despite telling state residents to stay home and avoid holiday gatherings.

As the pandemic continued, California continued to release unemployment funds to residents whose jobs have been lost due to the pandemic. As those eligible received additional funds, it was discovered more than $31 billion in EDD funds were claimed by scammers, including prison inmates. 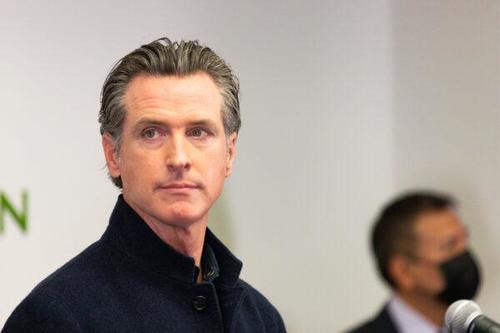 Amid the recall process, Newsom also faced critics who opposed his decision to allow for 76,000 state inmates, including violent criminals and repeat felons to exit prison earlier than their release date through the help of Proposition 57 that allows inmates to receive credits for good behavior.

The last time a governor was recalled in the state was in 2003 when Gray Davis was in office. Arnold Schwarzenegger succeeded Davis after 55 percent of state voters voted “yes” on the recall.

Elder said if elected governor, he would immediately move to end mask and vaccine mandates.

He also said he would suspend the California Environmental Quality Act, noting its effect on the cost of new housing being built and other construction projects.

While the final margin remains uncertain, because of the difficulty of estimating the margin of the remaining election day and late-arriving mail ballots – for what it’s worth, betting markets currently suggest that the recall is favored to fail by more than 20 percentage points.