Authored by Brandon Smith via Alt-Market.us,

No group in this world is above ridicule, and that includes the mentally ill. Just because the mentally ill become an organized mob does not mean they are a victim status group deserving of special protection or special treatment. The mentally ill are the LAST people on the planet that should be given the power to dictate the course of society. Madness is, in a way, infectious. Narcissism is poisonous. Psychopathy is radioactive. The majority of humans naturally discriminate against such people because every facet of our biology, every cell of our being warns us that if they are given an ounce of control, destruction will surely follow.

Human tribes and societies have understood this reality for thousands of years. Our repellent reactions to madness are ingrained in our cellular memory. Just as we instinctually recoil from snakes and spiders we have also learned over millennia to recoil from unhinged minds. But for some reason in the past 5-10 years we are being told to embrace the exact reverse. The insane are now above the rest of us. The insane must be worshiped. The insane are our leaders and role models. Biology is wrong, and the cultural Marxists and woke ideologues are right.

The new narrative is that truth tellers and rational people are the “insane” ones and they should be watched or possibly locked up.

I’ve been writing about political correctness and woke culture for a long time now, and I have to say that the developing trends of social justice are not surprising. However, the speed at which they are being forced on the rest of us today is disturbing. One has to wonder if the woke mob is in a rush to meet some kind of propaganda deadline the rest of us are not aware of. 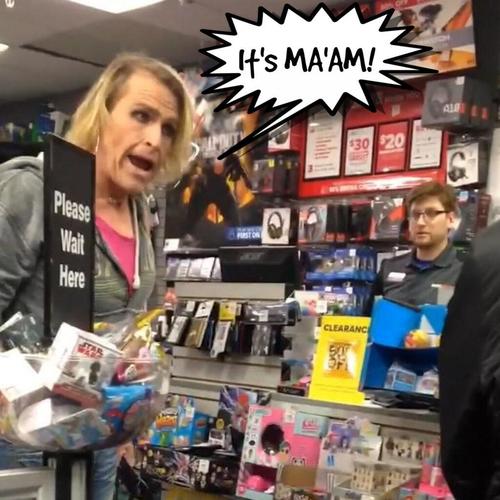 The gender and “Trans” issues are really at the forefront of leftist ideology these days. If you have observed these people for any length of time you know all about the Oppression Olympics and the intersectional totem pole. And, you are also probably aware that people who claim to be trans earn an automatic spot at the top of that totem pole, well above women, black people, and even your run-of-the-mill gay people. The trans costume is the most powerful of all SJW costumes and imbues a person with unlimited protection no matter how terrible that person might be. It even allows them to dictate the very thoughts and speech of the public at large.

For example, there is a policy among western governments to allow male convicted criminals who claim to be trans women to be interned in women’s prisons. This allows them to rape female inmates at their leisure while claiming special status. Yet, according to the leftist media it is the men posing as women that are being “victimized” by guards and female inmates. In Britain, they are even passing a law which makes it a crime for prisoners to use the wrong pronouns when referring to a trans inmate.

It is important to note that the trans identity is a sort of magic ticket for white people in particular. The SJW cult is especially concerned with all white people (mainly white men) as some kind of monstrous threat to the safety and emotional stability of everyone else. If you are a white person within the SJW religion you are immediately hated for your original sin and are relegated to the leftist gutter. They despise your skin color, and no amount of help you give as an “ally” is going to earn you a place among the oh-so-holy oppressed.

Unless, that is, you say you are trans. Then, as if you have touched the pure hand of the SJW deity, you are suddenly absolved of all your inherent white evil and are given a mantle of divinity. You are better than everyone else, because you are supposedly the most oppressed of them all.

Maybe this sounds like a bit of exaggeration. Surely I am engaging in hyperbole. I promise you I am not. Western culture is being increasingly segregated by the political left into various tiers of people based on their skin color as well as their sexual orientations and mental instabilities, and the more made-up the orientations and the more volatile the mental instability the more privileges a person is afforded. The patients are truly taking over the asylum.

I am revisiting this subject because I have noticed a renewed uptick in aggression from leftists on the trans issue, and I suspect this is because they are starting to get more push-back from the public. The latest Dave Chappelle special on Netflix triggered the sensitive snowflakes again simply because Chappelle argues what most of us already know –That gender is a biological fact, not a social construct.

This has led to numerous angry demands on Twitter to have Chappelle kicked off Netflix and canceled in general. For now it seems as though these demands are being ignored, which is exactly what should be happening everywhere all the time.

Others, like author JK Rowling, have not been as lucky. And I suspect if Dave Chappelle was white it would be a different story.

Sometimes people in the middle of the totem pole can get away with criticizing another group in the progressive stack, but if you’re a straight white person there are no allowances.

Why are people that represent a tiny percentage of the population (around 0.3% or less) being given massive special attention and enjoying unprecedented legal regulations in their favor? Why are states like California going out of their way to force the public to accommodate the tiny trans minority, to the point of passing laws which make it an offense to have separate toy aisles for boys and girls, or trying to make it illegal to ignore a person’s preferred pronouns?

Again, it seems that leftists (mostly middle-class and rich white progressives) are creating a kind of ultimate victim pass – A way to climb to the top of the totem pole from the very bottom. All they have to do is loudly denounce biological gender and say they are “trans”, and like magic they become part of a new civil rights movement in which they are the righteous “freedom fighters” in a fake revolution for a fake cause.

Anyone that asserts conflicting viewpoints on the trans issue is usually met with accusations of bigotry and “transphobia.” After all, why should we care about the trans movement getting whatever it wants? Is it because we are prejudiced?

This is a gaslighting tactic among leftists to deter any criticism of their activities. For most people who argue against corporate marketing and government laws in favor of gender neutrality, our interest is in fighting against the propaganda and disinformation, not fighting against trans people in general.

There are some real transexual men and women out there that suffer from a disorder called “Gender Dysphoria.” It is an extremely rare condition; a mental illness that is mostly harmless to the rest of society but does cause a high rate of depression and suicide among those that have it. I don’t have any problem with these folks or their existence. What I do have a problem with is social justice Marxists exploiting gender dysphoria as a weapon in their ideological war to tear down western society and replace it with their own dystopian vision.

The issue here is not about actual trans people, but about respect for freedom of speech and thought. You see, every single facet of the leftist movement is about collectivism and control. They say they care about minorities and their well-being, but they are really just using them to further their own twisted political conquests. Whether we are talking about critical race theory or the transgender movement the end goal is always the same: The leftists want to put themselves in the position of arbiter over what speech is acceptable and what speech is not acceptable.

Once they are allowed to dictate what is and what is not “hate speech”, they then control ALL speech. Control is obviously the agenda rather than the defense of minorities; all you have to do is examine how they treat minorities that step out of line. Look at how they attack blacks like Dave Chappelle, classic feminists like JK Rowling, gay people like Dave Rubin or even trans conservatives like Blaire White. They are part of the precious totem pole, but as soon as any of these people leave the leftist plantation or speak contrary to the main agenda they are declared heretics and viciously excommunicated.

The battle over pronouns is indicative of this agenda because it requires the forced participation of everyone in the delusions of a minority of people with mental instability. It requires that I give respect to someone who hasn’t earned it and is not entitled to it, and call them whatever label they dictate I call them for however long they wish. And if I don’t, I am evil and should be punished by the state or by the mob.

Imagine if schizophrenics decided to join together into a movement to demand that the rest of society call them by whatever delusional persona they happen to fantasize about that day. A guy suddenly decides that on Monday he is Napoleon Bonaparte or Jesus Christ and I’m supposed to accommodate him or be called a bigot? There is really no difference between this and what the LGBTQ-whatever movement is demanding when it comes to their made-up pronouns.

I really don’t care if a person wants to declare themselves transgendered. That action by itself doesn’t really affect me and I hope it makes them happy. I think they should seek psychological help because if they really have gender dysphoria then they are statistically far more likely to commit suicide (and it’s not because society makes them commit suicide, there is no evidence to support that claim). Beyond that, as long as they don’t turn their sexual preferences into a political mob then there’s really no conflict. If I really like the person and they are respectful of my personal freedoms, I might even use their pronouns, who knows. Frankly, I don’t think any reasonable person would care about pronouns outside of their own biology.

The war arises when leftists and the trans people they exploit try to impose their ideology and their views on the rest of us. The fight is over freedom, not over trans people. If you want to control how I talk, how I think and how I live; If you don’t respect my freedoms then I don’t respect you. You are not owed or entitled to respect just because you were born or because you think you are special. You get respect by earning respect. You get respect for your actions, not your identity.

The world is not here to accommodate you or your pronouns. People are not here to adjust their speech to protect your feelings. Your feelings do not matter. Your pronouns do not matter. You will be measured by your accomplishments and by how much or how little you violate the rights of others. And if your goal is to manipulate or control how the rest of us speak or interact according to our natural biological preferences then perhaps you should start your own society somewhere else? Maybe somewhere far, far away…

If you would like to support the work that Alt-Market does while also receiving content on advanced tactics for defeating the globalist agenda, subscribe to our exclusive newsletter The Wild Bunch Dispatch.  Learn more about it HERE.