50% Of Americans Fear Bankruptcy Due To Medical Bills

Despite the Nasdaq and S&P500 soaring to new highs, there are lingering vulnerabilities among the American consumer base, with at least half of all adults concerned they would go bankrupt due to an unexpected medical event, according to a new study.

The study, commissioned by West Health and Gallup, found 50% of respondents were “extremely concerned/concerned” about bankruptcy should a significant health-related expense strike their household. The figure was up five percentage points over the year from 45% in 2019. The largest increase was seen in minority households, increasing 12 percentage points from 52% in 2019 to 64% in July. 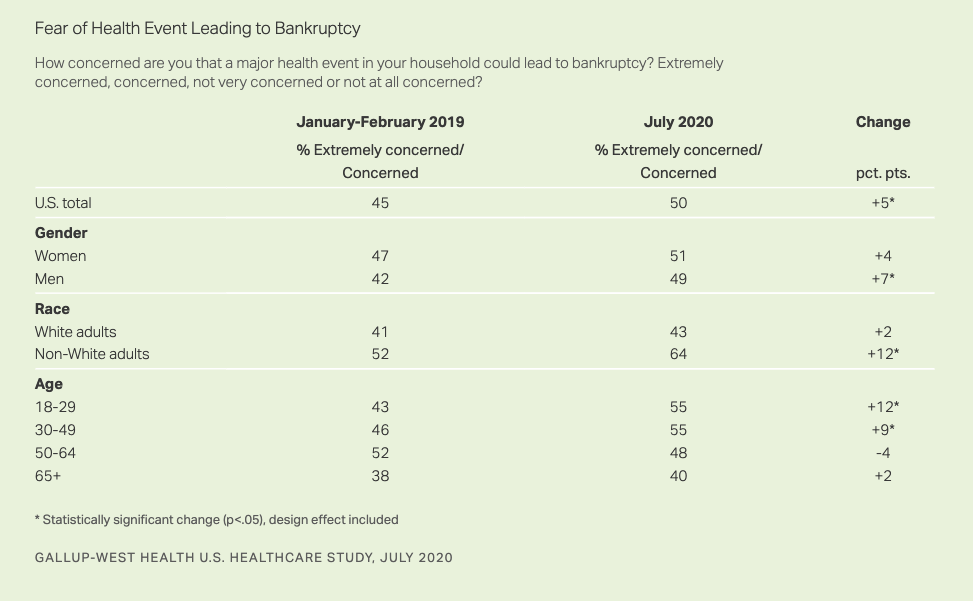 West Health and Gallup surveyed about 1,000 U.S. adults from July 1-24. The survey found millennials and Generation X were also “extremely concerned/concerned” about the risk of bankruptcy if they were slapped with a hospital bill.

Respondents said at least one person in their household currently has medical debt that cannot be serviced in full or within the next 12 months. This was 12% for white adults and 20% for minorities. In terms of social class, respondents in low-income households had a higher probability of not repaying medical debt versus households with an annual income of over $100,000.

Gallup found nearly a quarter of all U.S. adults must borrow money to pay a $500 medical bill.

With substantial percentages of adults reporting that they currently have medical debt that they cannot pay in a year or less, it is probably unsurprising that 26% report they would need to borrow money to pay a $500 medical bill. To do this, 12% say they would use a credit card or get a loan from a financial institution, while another 14% would borrow from a family member or friend. For some persons, these forms of borrowing could ordinarily be characterized by prompt repayment (such as simply paying off the credit card at the end of the month), but for many others, it is likely to feed into a cycle of accumulating medical debt that cannot be readily repaid.

The need to borrow money to pay a $500 medical bill is particularly common among non-White adults (43%) and those living in households earning less than $40,000 per year (46%). -Gallup

Respondents said lowering the cost of prescription drugs is one of the most important issues that will influence their vote in the Nov. 03 presidential elections. 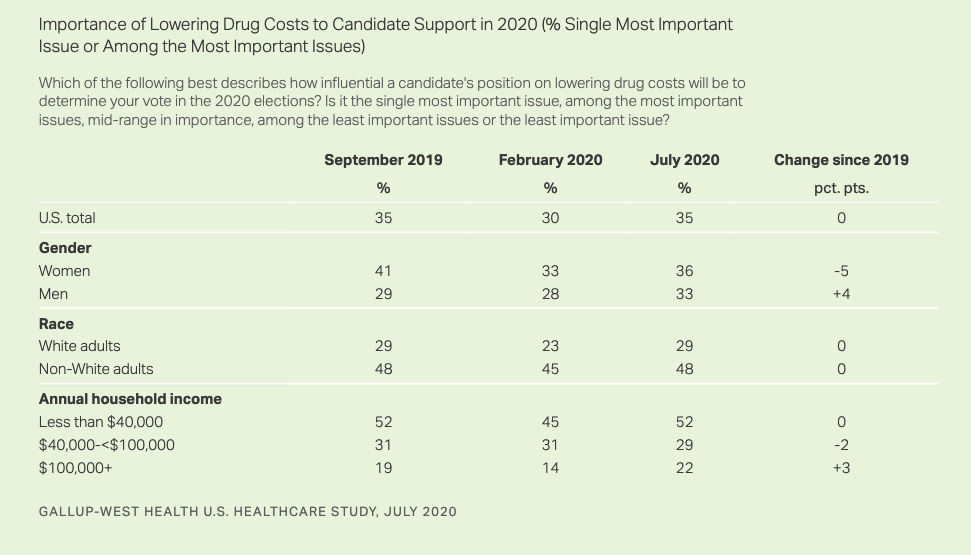 The study said, “the sharp rise in U.S. healthcare costs, which was already a significant problem for Americans before the COVID-19 pandemic, has only been exacerbated by new challenges presented by the outbreak.”

It continued, “14% of Americans with likely COVID-19 symptoms reported that they would avoid care because of cost, and 88% are concerned about rising drug costs due to the pandemic. These COVID-19-related cost worries also come with a substantial racial divide. “

The survey was conducted in pre-fiscal cliff conditions. Readers may recall a quarter of all personal income in the U.S. is derived from the government, which means households are more pressured than ever to service their bills.

The growing and disproportionate medical-debt crisis is crushing low-income and minority households who continue to suffer in the virus-induced recession. The Gallop survey sheds new light on just how many folks are one hospital visit from bankruptcy.